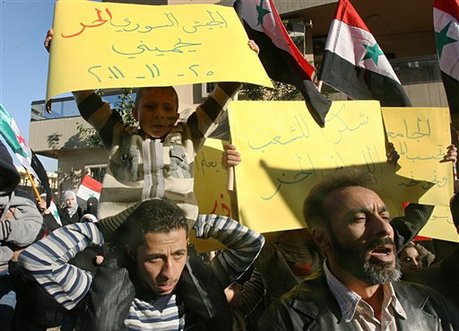 French military forces are training armed Syrian rebels in Turkey and Lebanon to fight the government of Syrian President Bashar Assad, a Turkish newspaper has reported.

According to Milliyet, as cited by The Islamic Republic News Agency, IRNA, the French forces are training the so-called Free Syrian Army to wage war against Syria's military.

The report said the French, British, and Turkish authorities “have reached an agreement to send arms into Syria.”

The three countries have also informed the U.S. about the training and arming the Syrian opposition, it said.

The rebel army has stepped up attacks on regime targets in recent weeks in a bid to topple Assad’s government which has waged a bloody crackdown on pro-democracy protesters since mid-March.

The Free Syrian Army claims to have some 20,000 deserters in its ranks. The group's chief, Riad al-Assaad, is based in Turkey.

The report came after the media also revealed that the British and French intelligence agencies have tasked their agents with contacting Syrian dissidents based in the northern Lebanese city of Tripoli to help fuel the unrest in Syria.

Reports also said that French agents have been sent to northern Lebanon and Turkey to build the first contingents of the Free Syrian Army out of the deserters who have fled Syria.

Some people like this so called arrogant mowaten think they are all knowing political analysts. I have yet to read a comment made by this pompous individual that is remotely linked to logic or is based on facts other than his sectarian shiite hatred and spite. He tends to open his dictionary to impress us with his use of difficult english words thinking it would earn him respect. He speaks as if he is an official of the blasphemous party of thugs. They tend to intentionally turn a blind eye to all the killings and torture happening in Syria and Iran. They have eyes but they don't see, they have ears but they don't hear. It is actually boring to even read their unwavering stupid comments almost on a daily basis. Soon, these people will shut up, hopefully forever.

How true is this BS?
Why do we always have to get Lebanon involved?
France and it's allies can use turkey or isreal as their training camps rather than Lebanon as we do not want another civil war.
If this war frees Lebanon from all lebanese/syrian/iranian militias and gets rid of the Palestinians, by all means welcome to Lebanon otherwise don't bother as it will make all of the above even stronger.

Ya mowaten you should be hassoun 's political advisor. Tell you what do yourself a favor& get the hell out of Lebanon & go back to Iran & please don't forget Hassoun in the bunker.

@ Lebanese i doubt that France is training anyone in Tripoli our beloved hezzi government will be all over it you would hear it first from through clown. I think they are way smarter then that.

@mowaten
Get ur facts right! If those 7 policemen were killed, it was only in reaction of the assasination of 2 protestors.

wost comes to worst the new training would match the old training, five reverse gears and one ahead,in case the enemy attacks from the back, LOL

mowaten re-writing history again, before Bin Jiddo's family was threatened in Syria and he resigned, the editor of Tishreen Samira al-Musalima was fired for doubting the regime's official line.

@sweating thing
1200 Lebanese were killed...because of the kidnapping of 2 army men...fly on th windscreen huh!? Idiot yourself!

if israel and the usa were behind this 'conspiracy' in syria as M8 claim it, how come israel doesn t want bashar to leave? how come the USA didn t do anything earlier...
how come they support the will of the people in all the other arab countries but not in syria.. they are so hypocrit, just like their masters are

This Turkish paper is one that belongs to the turkish opposition, what "trainning" in lebanon!? you must be kidding lol. As for MOWATEN, you were more than OKAY with the "flithy american zionists" when they took out Saddam and gave iraq to iran, right?? i cant hear you?!! so is malki that came on US tanks a "mumani3" too??... khalas bro, one for one.. iraq for the shee3a and Syria for the sunis (they are the vast majority) so get over it and quit the bullshit!

I do not believe any of that. Naharnet publishes the most false information to help its political agenda. There has not been any large cross border operations. You only have several thousand refugees and deserters in neighboring countries hiding (Compare that to the 1.5 million Iraqis in neighboring countries). If the opposition had 20,000 soldiers, they would have at least seized a small town. Wishful thinking.

Peace... the blood thirsty American imperialists do not want to support another failed mission. They ONLY supported the new Egyptian and Tunisian governments after it has been determined that it was all over for them. The US supported these puppet dictators for decades.

Just realized that the Taliban only number 20,000 fighters and they control half of Afghanistan. Imagine how many towns and villages the opposition would have seized if it was true (by the way, M8 and their allies also create a lot of false information).

The Lousy Syrian regime has been killing unarmed demonstrators...no different than the lousy Egyptian military regime. I do not know if M8 supporters do not believe it or they do not want to admit it.

qawmi john my qawmrade you are the most intelligent person in the universe I agree with you Naharnet to further it;s political agenda had Milliyet site The Islamic Republic News Agency, IRNA, they are so powerful at Naharnet

I also like that touch of sneakyness misdirect criticizing the Syrian regime very clever,