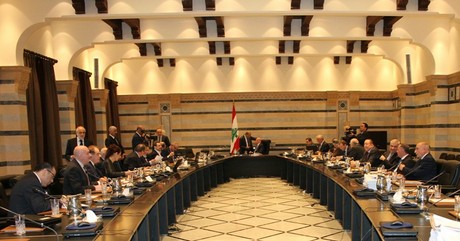 Hizbullah decided to boycott Thursday's cabinet meeting in solidarity with a similar stance taken by its ally head of the Change and Reform parliamentary bloc MP Michel Aoun, sources close to the party told As Safir daily.

The sources said that Hizbullah decided to be absent from the meeting in solidarity with Aoun and to show an understanding of his party's apprehensions and the seriousness of a continued “marginalization of a major Lebanese component.”

The party has informed Speaker Nabih Berri, PM Tammam Salam, Aoun and MP Walid Jumblat of its decision after trying in vain to push for the postponement of the meeting to pave way for some efforts it has been exerting to address the FPM ministers' objection.

Sources close to Hizbullah told the daily that the party blames al-Mustaqbal bloc head MP Fouad Saniora for aborting attempts to reach an agreement to postpone the meeting.

According to An Nahar daily, Hizbullah official Hussein Khalil has informed Bassil late on Wednesday that the party's ministers will not attend the meeting.

The FPM's recent boycott of cabinet meetings is linked to the thorny issue of military and security appointments and the government's decision-taking mechanism in the absence of a president.

Despite the FPM's declared boycott, Prime Minister Tammam Salam said that he will not postpone Thursday's cabinet session.

FPM head and Foreign Minister Jebran Bassil had accused the government of not respecting the National Pact when it “convenes in the presence of ministers representing only six percent of a main component of the country (Christians).”

Salam should resign and let the chips fall where they may.