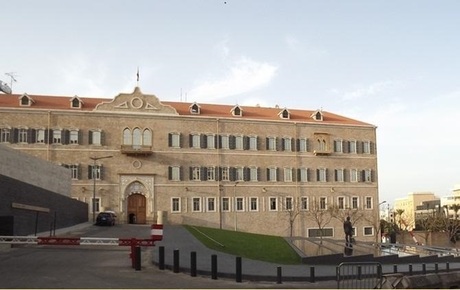 The cabinet convened at the Grand Serail on Thursday in the presence of 16 ministers and the absence of the Free Patriotic Movement, Tashnaq and Hizbullah members of government, a meeting which Premier Tammam Salam described as “constitutional and respects the National Pact.”

Information Minister Ramzi Jreije quoted the PM and said: “The meeting is constitutional and respects the National Pact. But the PM paved the way for further consultations as for the current crisis in order to find solutions.”

“The Premier pointed out that suspending the dialogue sessions reflected negatively on the general atmospheres. The productivity of the government is a key factor for the survival of the cabinet, otherwise it would be useless.”

Before they joined the meeting, Agriculture Minister Akram Shehayyeb said: “Hizbullah ministers are keen on the government like everyone else, but we are experiencing difficult circumstances.”

He was pointing to the party's decision to boycott the meeting in solidarity with its Christian ally the FPM.

For his part, Information Minister Ramzi Jreij stated that the interlocutors must lend an ear to the people's worries, he said: “We have to listen to the concerns and we hope that the FPM returns to the government.”

“I only came to the meeting to demand the postponement of the session,” said Tourism Minister Michel Pharaon ahead of the meeting.

On the other hand, Minister Nabil De Freij remarked: “As long as we have a prime minister to call for cabinet meetings I will dub as 'non-Lebanese' all those who fail to attend it. Those who do not want to attend to secure quorum are deceitful.”

Minsters of the FPM decided to boycott the cabinet meetings over the thorny file of military appointments. Furthermore they have accused the government of failing to conform to the National Pact when it meets in the absence of ministers.

Hizbullah on the other hand boycotted the meeting in solidarity with its Christian ally.