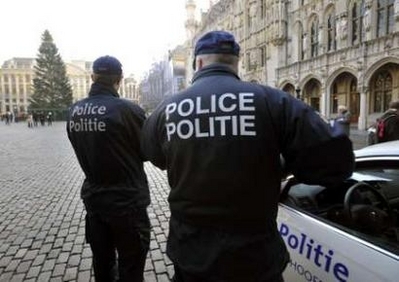 Police searched two homes in the Haren and Schaarbeek districts of Brussels and another in the city of Liege in the French-speaking Wallonia region, the office said in a statement.

"Two persons were arrested and will be interrogated by the investigators," it said, adding a judge will decide later whether or not to detain the pair further.

A judge specializing in terrorism cases ordered the raids "in connection with an ongoing federal investigation into the activities of a terrorist group," the statement said without elaborating.

However, the Belgian television station RTBF said the two arrested are a 28-year-old man and his female companion.

The man has been active in a chat group on the encrypted Telegram app where he "apparently indicated he was preparing to carry out an attack," RTBF reported without naming its sources.

The suspect had in the past been linked to criminal but not terrorist activities, it added.

The authorities were now trying to determine if there are links between the recently arrested users of Telegram in France and the man detained in Belgium on Friday, RTBF reported.

On Wednesday, a teenager was arrested in a dawn raid on his home in northeastern Paris during an investigation into the network of French extremist Rachid Kassim, with whom he had allegedly been in touch on Telegram about carrying out a terrorist act.

Belgium has been on high alert since several homegrown jihadists allegedly planned and took part in the November 13 gun and bombing attacks in Paris that left 130 people dead and wounded hundreds of others.

Jihadists linked to the Paris cell then allegedly carried out the March 22 suicide bombings in Brussels that killed 32 people at the main airport and a metro station near the EU headquarters.

Both sets of attacks were claimed by the Islamic State group.