Not All Observers Welcome for Morocco's Elections 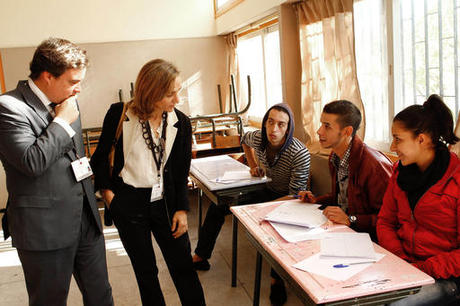 Morocco's elections next month will draw attention from around the region and beyond — but not all eyes will be welcome.

Fewer foreign observers — 92 this time compared to 121 five years ago — have been granted permission to monitor the Oct. 7 legislative elections, as regulations on external monitors are being put to the test.

More than 30 political parties are running in the elections, which will determine the makeup of the government and political direction of the kingdom, a U.S. ally and important regional economy.

It's only the second time Moroccans are voting for parliament since thousands took to the streets in 2011 demanding reform through the February 20th Movement. Since then, a coalition of several parties led by the Islamist Party of Justice and Development (PJD) has governed, coming to power alongside a new constitution and new laws intended to meet the demands for reform.

One law passed in 2011 dictated the terms and conditions for national and international election observation in Morocco. Civil society groups had wanted a law spelling out the rules, but some now fear it could be used to stifle criticism of the election process.

"Election observation in Morocco has been taking place since 1997, but it was only in 2011 that the Moroccan government instituted a clear, legal framework," said Nadir Elmoumni, director of studies at the National Council of Human Rights.

The council is charged with overseeing the observation process, including reviewing requests to observe from both international and national organizations. Requests must also be approved by a commission including representatives from the Interior Ministry, the Justice Ministry, the Foreign Ministry and the Communication Ministry.

The council told The Associated Press that it has accredited 92 foreign observers affiliated with five international organizations, among them the International Foundation for Electoral Systems and Gender Concerns International.

The council did not explain why the numbers are lower this year.

The Moroccan government denied accreditation to at least one international organization, the Atlanta-based Carter Center.

"We're disappointed by that," said David Carroll, director of the Carter Center's Democracy Program. "The Carter Center has a long history of impartial election observation, having monitored 103 elections in 39 countries, and we hope our observers might be welcome in Morocco's future elections."

The National Council of Human Rights said the organization submitted its request directly to the Moroccan government, not to the council. "I suspect it had to do with the wording of their request," says Ahmed Taoufik Zainabi, the council's director of human rights promotion.

Moroccan government spokesperson Mustapha El Khalfi did not respond to requests for comment.

A U.S. group, the National Democratic Institute, was accredited but says it won't send an observation mission due to funding constraints. NDI's report after observing the 2011 legislative elections describing the voting process then as "by and large, procedurally sound and transparent" but "not without flaws."

Eric Goldstein, deputy director of the Middle East and North Africa division of Human Rights Watch, says the rebuff to the Carter Center "could well be part of the trend since 2015 of expelling international NGOs that monitor freedoms in Morocco."

"It's a shame to see Morocco destroy its standing among countries in the Middle East and North Africa that are most transparent with respect to international NGOs," said Goldstein, whose organization was accredited.

Many of these NGOs monitor human rights in the contested Western Sahara territory, which Morocco annexed in 1975. Within the past year, the Moroccan government has dealt harshly with those it perceives as undermining its claims on the territory, including the European Union and the United Nations.

Official campaigning for the elections begins Sept. 23, with the Islamist PJD and rival Party of Authenticity and Modernity among the top contenders. A law bans political polling in the weeks ahead of the elections, in an effort to avoid swaying voters.

The very fact that they are not allowing all observers can only mean one simple thing. THEY HAVE SOMETHING TO HIDE.