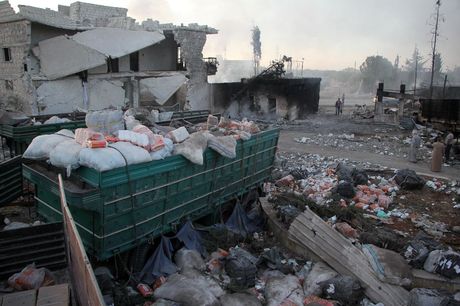 Air raids hit the two largest hospitals in rebel-held parts of Syria's Aleppo early Wednesday, putting them temporarily out of service, the medical organisation that supports them said.

"The attack happened at 4:00 am (0100 GMT). One warplane targeted both of them directly," said Adham Sahloul of the Syrian American Medical Society (SAMS).

"There are only six hospitals currently operational now that the M2 and M10 have been temporarily taken out of service," he said.

Both hospitals had intensive care units and trauma capacities and had been targeted in previous aerial attacks, according to Sahloul, who described the bombings as "deliberate".

It was unclear if the strikes were executed by Syrian forces or their Russian ally, both of which are carrying out bombing raids in Aleppo city.

At M10, the bigger of the two hospitals, the bombardment completely destroyed the facility's generator.

Three employees were injured at the second hospital, among them an ambulance driver, a nurse and an accountant.

"Two patients died. We are still trying to figure out if it was directly because of the attack or because treatment was cut off," Sahloul added.

The two hospitals were put out of commission as Syria's army, backed by Russian firepower, presses an offensive to retake eastern Aleppo city.

Sahloul warned of devastating medical consequences if violence spiked again, as it did with heavy aerial strikes over the weekend, while the hospitals remain closed.

"With these two hospitals gone, if today there is another offensive like Saturday or Sunday, this is signing the death warrant for hundreds of people," he told AFP.

Dozens of people have been killed in heavy bombardment of eastern Aleppo city since Syria's army on Thursday announced an operation to recapture the opposition-held part of the city.

Rights groups have accused Syrian and Russian forces of deliberately targeting medical facilities, with Amnesty International earlier this year accusing the allies of "wiping out hospitals... (as) part of their military strategy."

"The civil war in Syria erupted in early 2011, when dictator Bashar al-Assad."

So the ones trying to oust him are peaceful little humanitarian angels right Naharnet?

Mohammad Ali Sobhani current advisor in Iran’s Foreign Ministry and Iran’s former envoy to Lebanon from 1997 to 2005 criticized the Assad regime, saying, "The Syrian people initially protested peacefully for legitimate demands, but the Assad regime tried to suppress the demonstrations with excessive force which led to the emergence of armed groups later," and pointing out that if the Syrian state had taken measures at the beginning of the demonstrations to meet the legitimate demands of the protesters, the situation would not be like it is today. - Nov 28, 2014

Sobhani "The Syrian crisis started with the detention of youths who went out protesting. This behavior continued until [the uprising] turned into a war, had the government calmed people and played its role, we would not have faced the current political and sectarian conflict in Syria" - Nov 27, 2014

Russian President Vladimir Putin: "Syrian President Bashar al-Assad could have avoided civil war by responding more quickly to demands for political change. The country was ripe for serious changes, and the leadership should have felt that in time and started making changes. Then what is happening would not have happened" - Jun 11, 2013

Syrian VP Farouk Al-Sharaa, in an Al-Akhbar Exclusive: "At the beginning of the mobilization, the authorities begged for the appearance of a single armed person or a sniper at the top of one of the buildings. I do not deny that some of us acted as if the dialogue was unnecessary and whispered this to the leadership. So it distanced itself under the pretext that the internal and external opposition saw it as one of the regime’s charades. In the end, this finished off the political dialogue and opened the doors wide for the dialogue of bullets and guns. The drop in the number of peaceful protesters led one way or another to the rise in militants. The way events are heading will lead to an uncomfortable place where things will definitely go from bad to worse." - Dec 17, 2012

Just let those bombs keep coming. Revenge for what the Syrians did to Lebanon