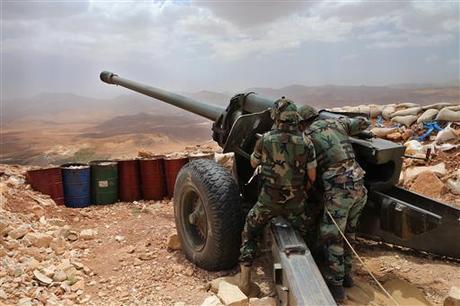 The Lebanese army shelled the positions of militant groups in the outskirts of the northeastern town of Arsal on Thursday, the state-run National News Agency reported.

The army targeted the movements of militants in Wadi al-Khayl, al-Zamrani and Wadi al-Debb in the outskirts, added NNA.

Militants from the IS and al-Nusra Front, which rebranded itself as Jabhat Fateh al-Sham in July when it split from the al-Qaida movement, are entrenched in rugged areas along the undemarcated Lebanese-Syrian border and the army regularly shells their posts while Hizbullah and the Syrian army have engaged in clashes with them on the Syrian side of the border.

war of attrition isn't the solution, but a full scale operation to smash them.... once for all and before it's too late.

btw: Rifi opinion doesn't count, he's one of them.... the ones who voted him, all are Nusra's supporters.

Too bad other factions in March 14 do not realize that some of their allies are protecting these takfiri groups in Arsal against the Armed Forces.

Either they already know it because of Saudi Money, or they are naive.

Rifi's opinion does not count, but yours does, right southern?

his opinion is biased and he openly defends Al Nusra's terrorists even against his own country interest, how then people can take his opinion as valid one!.

is Arsal famous in Portugal?

Thank you USA for the rounds.