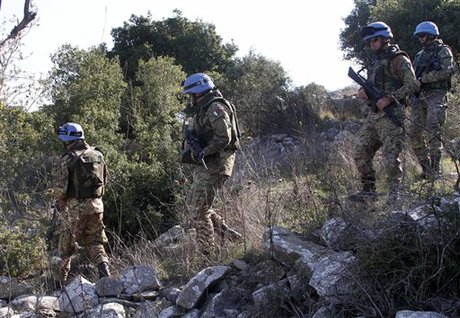 The United States on Tuesday called on all sides to exercise restraint after rockets fired from Lebanon slammed into Israel and Israeli forces retaliated.

"We condemn the firing of rockets from Lebanon toward Israel. This was a provocative act. It undermines the stability of Lebanon," Toner said.

He said the attack violates U.N. Security Council Resolution 1701, which ended the 2006 war between Hizbullah and Israel, urging Lebanon to cooperate with the UNIFIL peacekeeping force to identify the source of the attack.

An obscure al-Qaida-linked group calling itself the Brigades of Abdullah Azzam claimed responsibility for the rocket fire, the first such attack in two years, which comes amid fears that unrest rocking Syria could spill over into Lebanon, or provoke new conflict with Israel.

He reminded them of their obligation to fully adhere to Resolution 1701 and respect the cessation of hostilities agreement.

In Beirut, President Michel Suleiman denounced the attack, saying it was an "isolated" incident that breached Lebanon's commitment to international resolutions.

"This ... marks a violation of the stability in the south and a breach of U.N. Resolution 1701, Lebanese laws and Lebanon's obligations to the international community, primarily the United Nations," he said in a statement.

The most recent exchange of fire along the always tense Israeli-Lebanese border was on August 1, when soldiers from the two countries opened fire along the Blue Line, the border drawn by the U.N. after the 2000 Israeli withdrawal from southern Lebanon.

That incident came almost a year after Lebanese and Israeli troops traded fire along the same border, which killed two Lebanese soldiers and a journalist along with a senior Israeli officer.