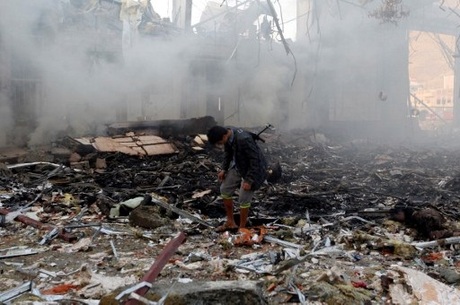 The Saudi-led coalition fighting rebels in Yemen said Sunday it will investigate an air raid that killed more than 140 people, after Washington announced it was reviewing support for the alliance.

The Iran-backed Huthi rebels have blamed the Arab coalition for Saturday's attack, one of the deadliest since it launched a military campaign against the Shiite insurgents in March last year.

The attack could further sour U.S.-Saudi ties already strained over the coalition's military intervention which is suspected of causing almost half of the more than 4,000 civilian deaths in Yemen's conflict.

After initially denying any responsibility, the coalition said it was ready to launch a probe into the "regrettable and painful" strike, which the U.N. said also wounded more than 525 people.

"The coalition will immediately investigate this case along with... experts from the United States who participated in previous investigations," it said in a statement carried by the Saudi Press Agency.

"The coalition is also willing to provide the investigation team with any data and information related to its military operations today, at the incident's location and the surrounding areas," it said.

The U.N. said aid workers were "shocked and outraged" by the attack that hit a community hall in Sanaa where mourners had gathered.

But Sanaa mayor Abdel Qader Hilal was among those killed, according to the rebels' Almasirah television.

Riyadh's key ally Washington warned it had launched an "immediate review" of support to the Arab coalition.

"In light of this and other recent incidents, we have initiated an immediate review of our already significantly reduced support to the Saudi-led coalition and are prepared to adjust our support so as to better align with U.S. principles, values and interests."

Price stressed that "U.S. security cooperation with Saudi Arabia is not a blank check", and called on all sides to implement an "immediate" ceasefire.

In August, the U.S. military announced it had slashed its number of intelligence advisers supporting the coalition following concerns over civilian casualties.

U.N. humanitarian coordinator in Yemen, Jamie McGoldrick, called for an immediate investigation into the funeral strike and said the international community must exert pressure to ensure civilians are protected.

A "horrified and extremely disturbed" U.N. Under-Secretary-General for Humanitarian Affairs and Emergency Relief Coordinator Stephen O'Brien called for a prompt and "impartial" probe.

The Saudi-led coalition has come under increasing international scrutiny over civilian deaths.

In September 2015, a suspected coalition air strike killed at least 131 civilians at a wedding near the Red Sea city of Mokha.

The Saudi-led alliance denied any involvement.

Some of the wounded had their legs torn off and were treated on the spot by volunteers.

In an initial statement to AFP, the Saudi-led coalition said it had no operations at the location and "other causes" for the incident must be considered.

In its latest statement, however, the coalition expressed its "deepest condolences and support to the families of the victims of hostilities since the coup takeover of power in Yemen during 2014."

The coalition -- which also comprises Bahrain, Egypt, Morocco, Qatar, Sudan and the United Arab Emirates -- has faced repeated criticism from rights groups over civilian casualties in its campaign in Yemen.

The Huthis swept into Sanaa in September 2014 and advanced across much of Yemen, forcing the internationally recognized government of President Abedrabbo Mansour Hadi to flee.

The conflict has killed more than 6,700 people -- almost two-thirds of them civilians -- and displaced at least three million since the coalition launched military operations, according to the United Nations.

U.N. rights office spokesman Rupert Colville said Tuesday that from March 2015 through September 30, 4,014 civilians had died and nearly 7,000 had been injured.

Probe it how? When paralyzed Ban Ki Moon tried to make a probe into the killings of Children, you pressured them.

And your not Arab then LOL notch YA!

Can you explain how the Saudi actions are any different than ASSad's over Aleppo?

Geesssss at least the Saudis said 'The coalition will immediately investigate this case ....' unlike the ASSad and Putin Cake! My opinion, i really believe the Saudis did attack these civilians on purpose...

MYSTIC, you want to join me and Acknowledge that both our leaders are not following the truth... or you prefer to be sheep herded....

Between Assad/Iran/Hizbullah and Saudi/Daesh, seems that the only ones trying not to harm Arab civilians are...the Israelis