Franjieh Broadcasts Video on Twitter ...What Was the Message? 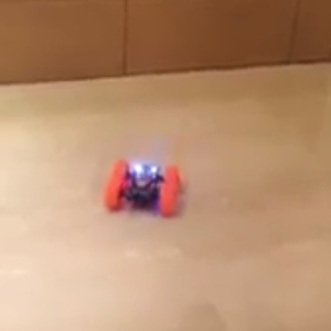 Marada Movement chief and a runner in the presidential elections MP Suleiman Franjieh, posted a video on Twitter that some interpreted as a message to his rival in the race MP Michel Aoun.

Franjieh posted a video of a remote controlled toy car with orange wheels (the color of the Free Patriotic Movement's slogan) moving randomly and spinning around itself in a room with a closed door.

Some have interpreted the video as mimicking the situation in Lebanon as being controlled by foreign powers.

Others said the video was downloaded by mistake, while some said that the orange wheels of the car convey a message to founder of the Free Patriotic Movement of MP Michel Aoun as for the post of presidency.

Franjieh's video comes after allegations that Aoun's chances to become a president have dimmed, following the speech of his ally Hizbullah leader Sayyed Hassan Nasrallah over the weekend that urged him to hold consultations with Franjieh, and Speaker Nabih Berri in order to end the deadlock.

For his part, Franjieh has affirmed on more than one occasion that he will not withdraw his nomination for the post.

Lebanon has been without a president since the term of Michel Suleiman ended in May 2014 and Hizbullah and MP Michel Aoun's Change and Reform bloc and some of their allies have been boycotting the parliament's electoral sessions, stripping them of the needed quorum.

Al-Mustaqbal Movement chief Saad Hariri's recent return to Lebanon has triggered a flurry of reports about a possible presidential settlement that the ex-PM is exploring the possibility of endorsing Aoun for the presidency in a bid to break the deadlock.

The video's message is clear and depicts Lebanon's crazy situation. A nation without purpose, direction, or leadership.

Is this the new game on social media in Middle East politics, publishing not-so-hidden messages by "mistake"? Franjiehs rating declined in my view after this. Or wait, his rating was zero from before.

we might no like the man, but i thought his message was clever and subtle. A toy car being remotely controlled, spinning out of control and climbing up the walls is a very clever message reflective of the state of this country.

Actually, if you analyze it a bit deeper you will see the car with its bright "orange" wheels refers to Aoun. He goes forward, backwards, changes course and alliances, has a tantrum, climbs up the wall in hysteria and is remotely controlled.

That is how I read it.

very well interpreted. I think you are right

How is this making news ? What an idiot.

Both of these two traitors are remotely controlled : One by Syria and the other by Iran.

I am in Thailand grieving and offering my condolences to the Thailandish people for their loss. So many people Cutie paying their respect. People are jammed cheek by jowl along the roadsides. I am a guest of the Thailandish Royal Family and will be going to Koh Lanta after the ceremony for girls only time.