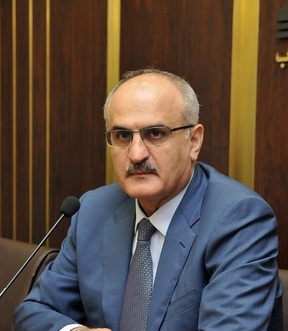 “The problem with General Michel Aoun cannot be resolved with a visit (to Berri) and the issue is not a matter of formalities,” Khalil was quoted as telling reporters.

Marada Movement chief “MP Suleiman Franjieh was briefing us on all the details of his agreements with ex-PM Saad Hariri, unlike the General,” the minister added.

“We will take part in the presidential election session and we will vote against Aoun and Speaker Nabih Berri will be the first person who will congratulate him,” Khalil went on to say.

In remarks published Tuesday in al-Akhbar newspaper, aides to Berri had accused Aoun and Hariri of seeking to undermine “the partnership with political Shiism that followed the Taef Accord.”

Politicians love lying. Because it helps them manipulate the followers.

For me, I haven't changed. Caporal - president or not- remains corrupt, liar, megalomaniac, mareed, jaban, and traitor. He isa destroyer, not a builder.

He is surrounded by super-corrupt people.

Isn't it rude to refer to yourself as a bloc?

This could have been predicted. Hezbollah was with Aoun only when he was the poison pill for the rest of the country, so that by backing him, Hezbollah was backing the paralysis and, Hezbollah hoped, the fall of the Taif 50-50 regime.
Geagea exposed this with his endorsement of Aoun. The Shia had said for 2 years, if all the Christians give us a Christian consensus candidate, we will vote for him. As soon as they did, the Shia balked.
Hariri's coming around to terms with Aoun has now given way to this threat of civil war in Lebanon if Aoun is elected.
It is a bluff. Hezbollah is too deeply involved in the Syria War to open a new front at home that would lead to its defeat and the loss of its home base for regional operations. But, Berri, always loyal to his pocketbook, is doing Hezbollah's bidding with this stunt.

So it's "المثالثة" or civil war then. Once again Aoun's destructive pathological lust for the presidency will further erode Christian representation. Ironically if he ever becomes president it will be on the shoulders of the same people he deserted and betrayed in 2005 from Paris following Syrian and Hezb promises of the presidency. Had he held to the same principals he fought for the previous 15 years maybe he's be enjoying his retirement an ex-president respected and lauded. Now all his allies since 2005 will be voting against him, allegedly except Hezbollah. The Marada, SSNP and Baath MPs will be voting for Frangieh as will the man who gave him ten ministers in the Hezballah cabinet of 2011. Allas if he's elected he will not be finishing his term either because of age or because of the Bashir Gemayel/Rene Mouawad syndrome, "you do what we tell you to do or you die".

The shias said they will go along with whoever the Christians choose for president. Why are they now creating all these problems? or was it just takiah as usual?

but how will they "steal" if they are not in the government? Will they dedicate their time to just drug trafficking and ransom money from kidnappings?

And you do not know how to read.