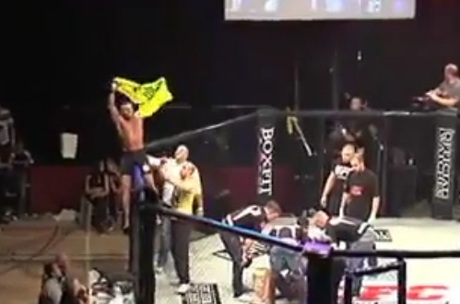 Social networking websites were buzzing Wednesday with supportive and critical comments about a video showing Lebanese cage fighter Mohammed Ali victoriously brandishing a Hizbullah flag after delivering the knockout punch to his foe in the 11th Cage Fighting Championship held in the U.S.

The video then shows the Lebanese warrior’s entourage jubilantly entering the cage and one of them handing him the flag of Hizbullah, which is classified as a “terrorist organization” by Washington.

Afterwards, Ali triumphantly raises the flag and waves it to the cheering spectators present at the arena.

It would have been so much better had he raised the LEBANESE flag instead.

They identify more with Hizbola than Lebanon...

Just to show the real allegiance of these thugs... a flag of an organization instead of the flag of his country! Do these guys understand why we utterly reject them, their party, their ideology, and everything they represent?

The day will come when we will kick those thugs out of country, and restore Lebanon to the true Lebanese... Soon inch'allah!

unfortunately the Karbalaa industry is just like the holocaust these days... so far from the true meaning of ISlam when we worship a person..

They are living their last days.. let them enjoy the jackpot.. the house always wins

I love it when naharnet's Lebanese bien2ifshu. The Hizbullah flag in this case is more significant because the land of freedom forbids it.

Might be mistaken, but all talk in british or Australian accent and not us

The West is what has given us all our problems. If they never took part in the post Ottoman Empire reconstruction of the Middle East, we would not have these stupid parties anyway, we would have just had the values that allowed the Arabs to succeed in the past.

"Brandish" makes you at Naharnet sound like you regard a flag as a weapon. Moverover, a weapon which you fear.

Just being a cage fighter shows the intellectual level of this guy!

Oh man, the FBI will be up his ying yang now for showing this flag.

They only resort to brutality. They can't win politically or intellectually.

Too bad they have no patriotism.

At least he did not hang a huge picture of the saudi king in Beirut while proclaiming Lebanon First....

CFC is in australia im pretty sure, which is why he holds it up. He'd be too afraid to raise it live in the States because they would rape him. plus theres plenty of Christians in UFC that could out fight him.

all u haters keep on hating. RESPECT to this warrior.

if your Lebanese you raise your country's flag if he's American / Lebanese he should raise both flags. regardless that was a good knock out.

@bigdig; If America is their enemy, then are half of them are living in Dearborn, Mitchigan???

thanks mcbrain, i tried to say that earlier yet no one took notice. The announcers and refs are not speaking with a us accent...

A disgusting thug.....He is a citizen of the statelet of hizb of thugs!

@Luxembourg Bob, you seem to lack the ability to think things out. Don't you think it would have been rather stupid for Hariri to put that poster there when he was talking about Lebanon first? Don't you think it made him look bad? The answer is yes. The poster wasn't hanging the whole time, just dropped when Hariri went up. Why? To make him look bad. Now think, who owns the building the poster was dropped from?

There, now you can shut up.

CFC is in Australia i believe. It wasnt so smart to lift the flag up at this stage of career cuz it will not move him forward, politically they wont let him. He is not even in the big leagues (UFC) to give the big FU to whomever.

Was it even a title fight?

Anyways, IF he does make it big, if his fight card is against a jew, he will have to directly forfeit due to Lebanese law

There was a boxing match in Canada that had a Lebanese vs a South american and it was a fight of the century, as commentators described it. Both gave it their best.

@hanna
A "Mc brain" does not sound super appealing ;-)

Hanna there are many important subject to discuss..However the sectarian bloggers are focusing on trivial subjects...Biased Naharnet won’t ban the people who spread hatred.....If you live abroad do yourself a favor and avoid having a relationship with the Lebanese …They will bring you worthless headaches and the comments are the best example....
MrBrain

What the hell is this guy doing in the USA, living there, earning money there, PAYING HIS TAXES, living the American dream, If he likes the Hizb that much.

Knowing that this party says every day: death to America.

He is betraying this party AND the USA somehow!

I would love to see him fight in south Lebanon instead.

Sweating_demon-- it is a matter of principle. IF i hate Nigeria and I am a racist guy for example, I won't go there, work and wave the KKK flag!

But this is hypocrisy!!

@youssefhaddad loooooool!! Little does this guy know that all the gym and muscles = 1 bullet :) Hizbollah rules lebanon.. how beautiful

That fight was in the UK, vs scott stribbling (israeli Jew). Tony khalife did an interview with Ali on alNasher (Newtv) where he recounts the story how it happened. It's best to know the facts before commenting...

You idiots, it is a statement and stand he is making by raising the flag and because he is not allowed to do that, he is also proud like many other Lebanese of the resistant, and for those who think they should go to Iran cause they are getting the support from them,so what, during the WW2 many resistance movements used to get help from the U.k, the French and the Norwegian resistant used to have their headquarters offices in London, so next time thing before you talk and remember history well, all the Lebanese should be proud of them cause they liberate the country from the Israeli invasion, not only the Shi'ite area and trying to make them look as if they are the bad guys.

i like wat he did, he is free to do watever he wants
i respect that, and i hate those peaple who dont ....

Just for your info all of you, he was wearing the lebanese flag. but i guess your terrorist thinking and hate toward some of the lebanese society blinded your eyes :)
Go Mohammad Ali, we adore you