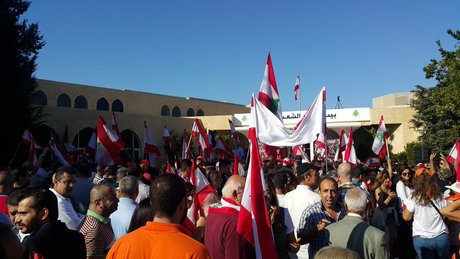 Supporters of President Michel Aoun were on Sunday flocking to the presidential palace in Baabda from all Lebanese regions to extend congratulations to the newly-elected president in scenes reminiscing the 1988-1990 era when Aoun was in the palace as the head of a military government.

The crowds were exclusively carrying Lebanese flags at Aoun's request. State-run National News Agency said security forces confiscated a number of partisan flags near the palace at the request of the organizing committee and in line with Aoun's wish.

Aoun was expected to address the crowds from the palace's balcony and five long-time comrades were supposed to be standing next to him.

NNA identified the five figures as Maj. Gen. Edgar Maalouf, an incumbent MP and a member of Aoun's then military government, Maj. Gen. Nadim Lteif who was General Security chief under Aoun, Brig. Gen. Michel Abou Rizk who was Aoun's head of Presidential Guard, Capt. Habib Fares who was a bodyguard of Aoun, and Dr. Pierre Raffoul, an incumbent Free Patriotic Movement official who was in charge of organizing popular demonstrations during Aoun's tenure as prime minister.

We wish we were with you guys celebrating this magical and historic moment. But we are in Iran right now pledging allegiance to Ayatollah Ali Khamanei. Sorry

why so bitter? lol

Even on an article regarding Aoun Supporters Flocking to Baabda, I find you @mowaten spamming, trolling, and terrorizing other posters. What kind of person are you? New evidence surfaces by the minute that you are a paid poster but the question remains who pays you and for what exact purpose? Is it the Iranian embassy, is it the revolutionary guard, is it the syrian intelligence or the ex-KGB? These questions must be answered by you and NOW!

"bend their spleens to suit their God"? uh, yea right, you dont sound bitter with such BS.

ya naharnet clean this site.............these two low class phenomen are not sunni nor shia for sure,naharnet dont play this game...