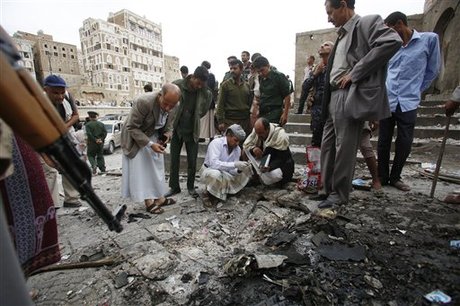 Another 21 million people are in need of urgent health services, the U.N. health agency said.

Speaking to reporters at the airport of the rebel-held capital Sanaa on Monday, U.N. envoy Ismail Ould Cheikh Ahmed said that the situation cannot continue.

"People are dying... the infrastructure is falling apart... and the economy is on the brink of abyss," he said.

Yemen has been rocked by fighting between Iran-backed rebels and government forces supported by a Saudi-led coalition since March 2015, months after the insurgents seized Sanaa and advanced across the country.

The U.N. envoy urged the coalition controlling Yemen's airspace to allow commercial flights into and out of Sanaa's international airport to evacuate the wounded.

The coalition argues that the rebels would use the airport, completely under their control, to transport weapons.

International organizations have also warned in recent weeks of a spread of disease and growing malnutrition rates in the country.

The WHO said 2.1 million people have been internally displaced by the conflict.

More than half of all health facilities across the country have been shut or are functioning only partially amid "critical shortages" in doctors, it said.

The U.N. has confirmed 71 cases of the disease, which is transmitted through contaminated drinking water and causes acute diarrhea.

Attempts by the U.N. envoy to convince the warring parties to commit to a ceasefire and resume peace talks have failed.

Ould Cheikh Ahmed urged the rivals to "make some concessions" and defended a roadmap for peace he put forward last month.

The mediator, who had been discussing his proposal with the rebels since Thursday, was headed to Riyadh to meet President Abedrabbo Mansour Hadi.

The contents of the roadmap have not been made public. But sources say it calls for agreement on naming a new vice president after the rebels withdraw from Sanaa and other cities and hand over heavy weapons to a third party.

Hadi would then transfer power to the vice president who would appoint a new prime minister to form a government in which the north and south of Yemen would have equal representation.