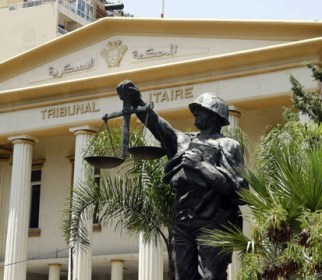 LBCI said that Judge Ibrahim referred the detainees to the Military Magistrate because of the involvement of military personnel in the case.

Amhaz and two accomplices, Issam Amhaz and Abdullah, were arrested Tuesday on charges of smuggling phones into the country.

Reports have said that Amhaz was arrested following the detention of a number of airport security personnel on charges of turning a blind eye to suitcases containing smuggled cellphones in return for bribes.

The U.S. Treasury Department had in July 2014 slapped sanctions on Kamel and Issam Amhaz and their Beirut-based Stars Group Holding for electronics on charges of “procuring sophisticated military equipment for Hizbullah.”

According to the U.S. Treasury, Stars Group Holding is based in Beirut and has subsidiaries in China and the UAE.

After their detention on Tuesday, relatives of Amhaz blocked several roads in Beirut's suburbs and the Bekaa in protest at what they called “fabricated” charges.

It was not only smuggled phones but suitcases of drugs.

Ashraf El Nass and their elite

It seems his arrest was done with hezbollah's approval.... read below. The Head of the Information Branch called Amhaz personally and invited him for a cup of coffee at the branch's headquarters. Amhaz called Hezbollah leadership who assured him all ok. When he got there he was put under arrest. It was a coordinated setup.

Amhaz met with the American Security Agencies in Canada last month despite Hezbollah's objections in order to remove his companies and himself from the sanctions list. This did not go well with the governor of Lebanon and things unfolded.