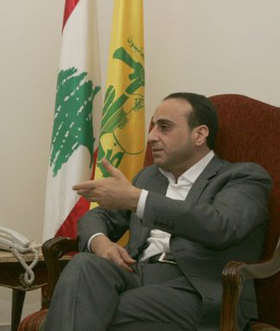 Hizbullah has hailed late Cuban leader Fidel Castro, whose death was announced on Saturday, as a “historic symbol.”

Ammar al-Moussawi, who is in charge of international relations for Hizbullah, lauded Castro as "a historic symbol whose life was a lighthouse to all revolutionaries around the world."

Castro, a titan of the 20th century who beat the odds to endure into the 21st, died after surviving 11 U.S. administrations and hundreds of assassination attempts.

No cause of death was given.

Hassan Rouhani, the president of Hizbullah's regional backer Iran, has hailed Castro as a "relentless warrior."

"Ammar al-Moussawi, who is in charge of international relations for Hizbullah"

what international relations does this heretic terrorist party have except with drug dealers and traffickers, criminal rings, and mafias all over the world..

Every state has an international relations post, including statelets within a state...

The failures in America tried over 600 times to assassinate the revolutionary.
He died at age 90 in his death bed.

He lived so long, that the U.S had to celebrate his death now, decades after he kicked out imperialism off Cuba.

Get closer to the TV screen, those celebrating are the Cuban Americans that immigrated from Cuba. They live in the closest state to Cuba which is Florida. If the US wanted Castro assisinated then they would have done it the bin laden, and saddam way....stop believing what your lying leadership is trying to feed you and instead believe in the land you live in before pledging allegiance first to Iran.

Do I need to remind you that the Lebanese Communist party assisted the Resistance during the 2006 war against the Israeli Invasion of Lebanon?

You destroyed all bridges and infrastructure of Lebanon in 2006 plus 2200 innocent lives. You are a militia taking orders from Iran NOT from the Lebanese community, people or government of the state you live in.

you always transcribe HA enemy's language to define it, try to use different argument, to be little bit credible, scum.

btw, HA is a clean party and major regional player, thus its stance is taken into account, live with it.

"HA is a clean party"

lonely terro, changing your name from jane to escobar doesn't make difference, your retarded style of tackling topics is obvious, sniffing stuff produces mental deterioration, therefore, the ones like you need to sniff more and more. KEEP ON.

RIP Fidel...he was a great revolutionary that the Americans through the 11 different presidents tried many times to assassinate him without success.

unlike you i'm glad that FPM and LF are together and finally GiGi had to elect Aoun as president, therefore, LF was driven from its Saudi and American camp to the patriotic one.. you have to live with it but hopefuly happy but not bitterlly trying to find excuses.

the resistance is an act of heroism against subordination and occupation that all revolutionaries share.... religion is personal and thus a different matter.

Yes we hail Castro as a hero, while you used the western imperialist term about him as a "dictator".

Yet you try to diverse our differences with the revolutionaries, you know readers can fully see whom are Pro Castro and whom are Pro American Westernized immigrants like you.

"...who's leader that the Christians of Lebanon were brought to mount Lebanon by the west ":

but this is of your invention, where is the credible report, record (not fake) of that lie?

when one leaves his country to another and live there, everybody calls him/her as an immigrant, nothing new here... but all Lebanese are not immigrants in their own country.

different matter is the origin of different comunities:

Shias are 90% of Phoenicians origin, the other 10% remain in the country during the al-Ghifari journey from the arabic peninsula.

Christians are 80% of Phoenicians origin ad the rest remain in the country durring the crusade.

Druz came from Syria and Palestine.

lol @Southern and his 90% Phoenician origin. Southern, you were and are still iranian farsi no matter how much you try to make yourself elite.

sure praising castro is good for populist business but if you take a look at the living conditions of cubans i wonder what is "heroic" about this dictatorship?

oh! i get it: only members of the regime lead a good life... no wonder lots of dictators praise castro while cubans who fled this dictatorship are dancing over his grave....

what is cute? your trolling?