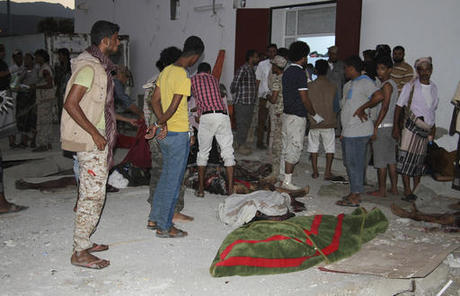 Forty-eight Yemeni soldiers were killed in a suicide bombing claimed by the Islamic State group in the southern port city of Aden, officials said Sunday in an updated casualty toll.

"We have 48 dead and 29 wounded," all soldiers, Abdel Nasser al-Wali, health department chief for Aden, told AFP, revising an earlier toll of 35 dead.

The bomber detonated his explosives belt as hundreds of troops had gathered to collect their monthly pay at a barracks in al-Sawlaban near Aden's international airport.

"A martyr from the Islamic State detonated his explosives belt in al-Sawlaban military camp in Aden during a gathering of the Yemeni army," the IS-affiliated Amaq news outlet said.

Yemeni authorities have for months pressed a campaign against jihadists who remain active in the south and east of the war-torn country.

IS and its jihadist rival al-Qaida have taken advantage of a conflict between the government and the Huthi rebels, who control the capital Sanaa, to bolster their presence across much of the south.

The two groups have carried out a spate of attacks in Aden, Yemen's second city and headquarters of the internationally recognized government whose forces retook the port from the Huthis last year.

The Iranian funded and supported ISIS blows up Yemeni soldiers and not shia Huthis.