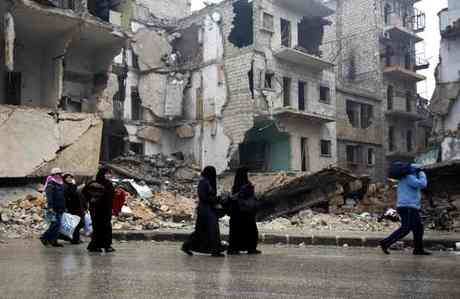 Syria's rebels once dreamed of overthrowing President Bashar al-Assad's government and taking control of the country, but with the imminent loss of Aleppo they now face the prospect of total defeat.

Though rebels retain territory elsewhere in Syria, including almost all of neighbouring Idlib province, a crushing defeat in the country's second city would be highly symbolic.

It "means the end of Syria's opposition as a force that can plausibly challenge the Assad regime or control a country", said Sam Heller, a fellow at The Century Foundation think tank.

When rebels stormed Aleppo in 2012, a year after the uprising against Assad began with anti-government protests, the opposition believed it was on the verge of overthrowing his regime.

With the support of backers including Western nations, Gulf countries and Turkey, opposition fighters appeared to have momentum on their side.

But in recent months, and particularly after Russia's September 2015 intervention in support of Damascus, they have suffered a string of defeats capped off by their likely loss of Aleppo.

"We're now past the point where the opposition has any hope of pulling back," said Yezid Sayigh, a senior fellow at the Carnegie Middle East Centre.

"They just no longer have the numbers and the geographic spread to be able to mount major offensives."

With Aleppo out of rebel hands, the largest remaining rebel bastion is Idlib province, which is controlled by an alliance dominated by former Al-Qaeda affiliate Fateh al-Sham Front.

Rebels also hold territory in southern Daraa province and the Ghouta region around Damascus, although the army has been advancing there.

- 'Capitulation deals' -In recent months, the government has sealed a number of "reconciliation deals" with rebel areas in Ghouta, securing the surrender of opposition fighters in return for granting them safe passage to Idlib.

The opposition criticises these deals as a "starve or surrender" tactic, with rebels forced into deals after months or years of army siege and sustained bombardment.

But Assad has long touted such deals as the best way to resolve a conflict that has killed more than 310,000 people and displaced over half the population since it began in March 2011.

"I thinks it's very likely that the loyalist forces will move quickly to impose capitulation deals on other rebel pockets," said Aron Lund, a non-resident fellow also at The Century Foundation.

"Dismantling the insurgency in Eastern Ghouta will be one of the regime's big projects in 2017," he added.

In Idlib, with access to the Turkish border and a deep well of fighters -- including new arrivals from surrendering areas elsewhere -- rebels are likely to be able to hang on for longer.

"You have an armed opposition there that remains vital and motivated," said Heller.

But the rebel forces in the northwestern province are also dominated by hardline Islamists and jihadists, making them an unappealing prospect to foreign backers, he added.

And with no plausible route to regime change left for the rebels, their backers may see little reason to continued provide support.

- Uprising seen as 'failure' -"If the rebels are seen as a lost cause, they're not going to get the same level of foreign investment indefinitely," Lund said.

"I'm already seeing some opposition sympathisers and rebel figures discuss events in Aleppo as if the uprising is now officially a failure."

Faced with overwhelming odds, some fighters may seek to lay down weapons and blend back into the civilian population, though more were likely to try to escape abroad, fearing regime retaliation.

Others could rally around the remaining hardliners like the jihadist Fateh al-Sham Front, though the Islamic State group was unlikely to become an attractive prospect, Heller said.

IS has fought against many rebel factions, and considers all those who have not pledged allegiance to be its enemies.

"Its reputation has been poisoned among pro-opposition Syrians," Heller said.

Despite their losses, pockets of rebels are likely to fight a low-level insurgency for a "long, long time", Lund said.

As rebel ranks shrink and remaining fighters cling to dwindling territory, the political opposition will find its already slim leverage in any negotiations all but exhausted.

"I don't see a political deal coming, there's no basis for it," Sayigh said.

"None of the actors have changed their positions to make a deal possible of any kind."

The dream of a Wahhabi caliphate, that is.

The dream of a Wahhabi caliphate, that is.

So what is the bad news?

Unfortunately you are unable to be present in person with your brave colleagues.