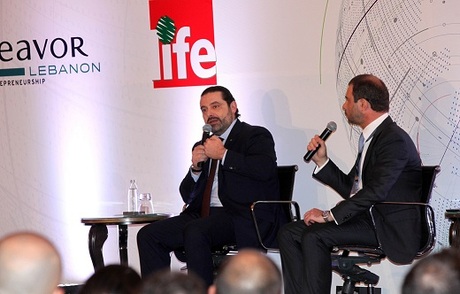 Prime Minister Saad Hariri announced Thursday that his focus is to restore confidence and hope in Lebanon, promising the Lebanese and investors a twenty-fold increase in internet speed.

Speaking at the third edition of the Global Business Summit, organized by LIFE and Endeavor at the Four Seasons Hotel, Hariri also promised that his government would make internet in Lebanon 20 times faster than it is now.

Asked about his plans to jumpstart the economy, Hariri said: “The most important thing is to make people believe in this country again and have hope in it. Political life is being regulated again, after we elected a president, formed a government and hopefully will organize the parliamentary elections.”

“Investors want stability. We can have quick wins in the government if we focus on technology and telecommunications. The issue of the Syrian refugees, which is a heavy burden for us, could be used to attract investments from the international community in all sectors. We host 1.5 million Syrian refugees. Our population is 4.5, which means that the refugees constitute 30 percent of our population,” the PM added.

“We also want to invest in electricity and all sectors. This government is supposed to last a few months, so we are trying to develop short-term, medium-term and long-term plans. I also want to hear from you and know what you need,” he went on to say.

About improving the business environment, Hariri said there are efforts to pass laws that “facilitate establishing start-ups, liquidating companies, and making business easier.”

Hariri also stressed that he believes in the privatization of many sectors, like electricity and telecommunications.

He noted that the political divide that split Lebanon in half is no longer present, pointing out that this divide in the past was an “obstacle” to many projects.

“My focus is to bring back confidence in Lebanon so that people come back and invest. Concerning incentives to encourage industries, we should facilitate business environment and fight corruption. We also should implement e-government, which will reduce half the corruption. Employing more women will also reduce corruption,” Hariri noted.

Asked about the education system, Hariri said that it is “excellent” in Lebanon, but should rely more on new technologies and make a better use of the internet.

Hariri promised that his government will make the speed of internet in Lebanon “20 times faster” than it is today, adding that this is a priority.

As for women's representation in government and parliament, he said that Lebanon should impose a quota in this field, like many countries did.

Hariri also said that passing the Public-Private-Partnership law in Parliament is a priority.