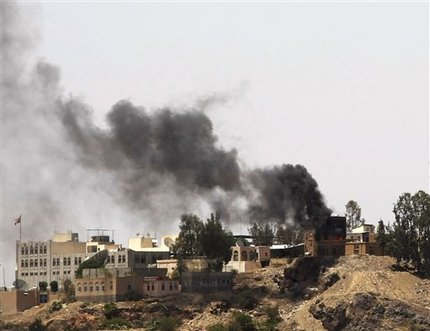 An air strike by the Saudi-led coalition on a primary school in rebel-held northern Yemen on Tuesday killed five people including two children, medical and military sources said.

The headmaster and two other staff members were among those killed in the air raid in the district of Nihm, northeast of the capital Sanaa, which also left 13 wounded, the sources said.

A medical source at Kuwait Hospital in Sanaa confirmed the casualty toll.

A government military official said the school was hit by two missiles by mistake, accusing the Shiite Huthi rebels of keeping armoured vehicles nearby.

Rights groups have repeatedly criticised the coalition over the civilian casualties inflicted by its air strikes on rebel-held regions.

In August, an air strike on a Koranic school in the northern Saada province killed 10 children and wounded 28 others, prompting a UN call for a swift investigation.

The Arab coalition launched a military campaign against the Iran-backed rebels in March 2015 in support of President Abedrabbo Mansour Hadi.

More than 7,000 people have been killed in the conflict.

A government military official said the school was hit by two missiles by mistake, accusing the Shiite Huthi rebels of keeping armoured vehicles nearby.

typical shia tactics, hiding behind civilians and setting them up for being targets... they did the same here in lebanon in 2006.