Report: MEA Plane Makes Emergency Landing after Fistfight On Board 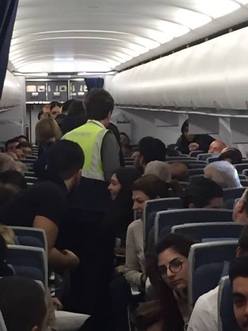 A Middle East Airlines plane en route from Beirut to London made an emergency landing Wednesday at Istanbul's airport after a fistfight erupted between two passengers, a media report said.

The passenger Z. A. Sh. got into a dispute with an air hostess before assaulting her, which prompted another passenger to rise to her defense and engage in a fistfight with the first passenger, LBCI television reported.

The plane's captain then decided to land in Istanbul and police was called in to arrest the assaulter, the TV network added.

“He is being interrogated while the plane is awaiting a decision to depart Istanbul,” LBCI said.

A security source following up on the matter revealed to NNA the assailant is a shia member of the terrorist organization Hezbollah. Security sources in Istanbul identified the assailant as a shia resident of Dahieh, a southern suburb of the capital beirut known for its lawlessness. The assailant confessed without further delay that he was ordered by the terrorist militia leader to attack the air hostess to divert the attention from President Aoun's successful trip to the Gulf States.

surely you have been abused when you were a child, really sorry for you.

Wait till you see him at Beirut harriri airport. He would yell at the immigration officer for checking his id

joebustani you are such a disgusting liar. I was on the plane, the guy was wearing gold and he kept swearing at god (Takfeer). you are really sick.

Ibrahim you are such a disgusting fabricator. I was on the plane too, the guy was wearing a silver necklace with Ali's sword and kept saying "Labayka Ya Hussain". You are really sick.

lol you put a big nail in this troll's coffin

I was in that plane too, even I was registering everything on my mobile, so have a video. This man was not any sort of Hezbollah, I think he was really mental & drunk. The most scary was that the staff was totally vulnerable, they don't have any security procedures or methods of how to defend security of passengers and aircraft.

Ma fhemna
Bennatije who hit the srewardess the fat guy or skinny one?
And did he actually hit her? What for?

Guys,
The first post is a joke, how can this detract from Aoun visiting KSA?
The rest of you need to calm down, your animosity towards each other only helps create further cracks in Lebanon's fragile society.
Whoever the man was, his religion did not play a part, he was just rude and that is unacceptable to someone who does a job as hard as a stewardess, they look after a lot of people in their job, give them some love and respect!

So sad that some pathetic troll uses this as a sectarian "opportunity"... At the end of the day, posts like this diminish us all as those outside the region not only gawk at this spectacle but also get to see the infantile sectarian spectacle that follows.