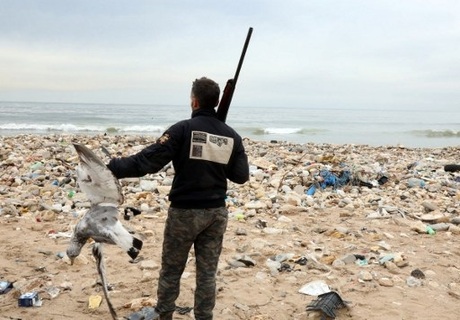 Following the latest warnings that flights in and out of Lebanon's Beirut airport are at risk because of the large number of birds flying over a nearby garbage dump, reports said Saturday that hunters are shooting down the seagulls which angered environmentalist movements in Lebanon.

A Lebanese environmental movement condemned in a statement on Saturday what it described as the “extermination of seagulls."

It said hunters are shooting down the birds near the Costa Brava landill, adding that Lebanon is violating the Agreement on Conservation of African-Eurasian Migratory waterbirds, LBCI reported Saturday.

The statement said: “Before the very eyes of the security forces, and at the beginning of the new term (of President Michel Aoun) and the new government (under PM Saad Hariri), who have vowed to preserve the environment, the seagulls in Costa Brava area are being exterminated at the hands of bird hunters which appeared in photos and videos circulated through social media outlets.”

On Thursday, Lebanon has closed the Costa Brava landfill which lies at the foot of a runway at the Rafik Hariri International Airport in response to concerns that seagulls circling around the site pose a threat to aircraft safety.

Birds were seen around the landfill as planes touched down on the opposite end of the runway.

Since authorities opened the landfill last year, environmentalists have warned it would attract large birds, leading to catastrophic strikes if they were sucked into engines.

Lebanon has been grappling with a garbage crisis since authorities were forced to close an overused landfill serving the capital in 2015.

“Under the eyes of the security forces, and at the beginning of the new term (of President Michel Aoun) and the new government (under PM Saad Hariri), who have vowed to preserve the environment, the seagulls in Costa Brava area are being exterminated at the hands of bird hunters which appeared in photos and videos circulated through social media outlets.”

emphasis put on "who have vowed to preserve the environment".... What a joke!

can we bring the men back from Syria to eliminate the birds with their arms instead of fighting another country war.

Lebanon is less than a medieval primitive society from top to bottom. The real cause of the problem is the filth and scum produced by the creatures inhabiting the areas surrounding the airport and whose illegal houses have spread to the runways. These slums must be removed and their inhabitants relocated to Iran where this type of lifestyle is common.

it now seems this troll called mowaten is one of those who live near the airport.;)

absolutely he is one of them and Lubnani's comment hit him hard. In his first wave of trolling he posted 12 hours ago , he read lubnani's comment but could not find and answer. He was pulling his hair, biting his nails, and grinding his teeth. He came back 4 hours later and posted his personal gem of a comment. Obviously, he was so bothered by the facts that lubnani's comment contained.

and to support libnani.masi7i's point of view look at these photos

just look at these barbarians showing off their crimes. Ironic to see them completely oblivious to the filth behind them that is causing these birds to congregate at this location.

Move the airport to a civilized location where squatters are not allowed to build shacks centimeters from the runways!!!

only a name like Khamanei international airport would satisfy a shia iranian troll.

he just said he wanted BIA back ya hasbara troll, give your iran obsession a break.

Hey _mowaten_…you are one man army...in this site so many personnels against you and you never backdown you tweet them back like a birdie on Twitter…I salute your shia iranian spirit.. I luv it.

Ironic Movaten, the king of obsessions calls someone else that. Perhaps his automatic assumptions and continuous obsessions with Wahabi's and Zoinists are in his brain "justified", but that's ok, right my favorite fake account creator?

wtf are you on psycho? you dont make any sense.

the iranian has no problem for streets and official assets being called after his terrorists such as Hadi Nassrallah Boulevard, etc. Only Rafik Hariri is a thorn in his side.

or use blablablabla and its stinky smell as a bird repellent.

eagleyawn is a special kind of troll, he only copy pastes the comments of his betters. take it as a compliment, it means he recognizes you as his superior.

the article is about flight safety and not about your bitter resentment of @eagledawn who humiliates you day in and day out not to mention your acute inferiority complex. These are things you discuss privately with your psychiatrist and not on the forum.

hahahaha yea marcus, keep telling yourself that, if it helps you cope with it.

mowaten thinks he is superior;) a sure sign of a troll. As others have already said, stop trolling and offer some comments of value. You are a joke talked about by every Lebanese who reads this forum.

I have the utmost respect for Mr. Saado Hariri and general Aoun who is now president for vowing to preserve the environment and for allowing hunters to hunt the migrating seagulls. I also admire them for improving things in the country from the minute they assumed responsibility.

Hello Puppet, I respect you by all means, because you are a true patriot, respecting every politician and all writers on this site.

May the respect be with you.

Mr. Rami quickly earned my respect and admiration for respecting me puppet by all means .

The Houthians should be ashamed of themselves for shooting the seagulls. This is an environmental crime no less significant than the war crimes being committed by the Houthians in Syria. After seeing the rhinos and dinosaurs being exterminated from our beautiful country, the seagulls seem to be their next target. I call on all the beautiful, young and educated women of my country to join me on social media #savetheseagulls and to join Jannah, Firdous and I in our demonstration tomorrow at 4 in the morning towards Baabda Palace to wake up our president and make him aware of this heinous crime.

btw, whenever an achievement is carried out at Lebanese soil, both Pro-Daeshists and Pro-Zionists jump to fill the forum with their discord, scums

excellent observation by the 'executive'!

the primitive uncivilized subhuman says " Good Job". No wonder this country is doomed.

to ensure flights safety, there are two measures, either falconry training to down them or if you lack for such techniques, you have to down them by hunting.... this is a global problem.

but narrow-minded stupid individuals like you can't see further their noses, scums

southern when are you going to congratulate hariri as you promised ? what excuses do you have except your hate for sunnis?

there is a third and a great measure that would forever solve this hazard: obliterate dahieh.

still you don't get it!!!, no wonder since you need more education and less sectarianism, sad if you really belong to this country, but i will be satisfied if your post from Texas or Haifa.

Actually, during the 2006 flattening of dahyieh we hardly noticed any seagulls and the problem did not exist at all. Only when they started building their shanty town and filthy slums again did the problem surface.

and how did you notice that!? surely you participated then in hitting civilian buildings while your fellows were being beaten up on the ground by the Lebanese resisatnce!

those 2 proverbs apply to you:
➀ a thief believes that everybody is like him, a thief
➁ when a fool takes a road, the road ends but the fool continues.

learn how to write something by your own, everybody notice your burglaries by now.

southern, i don't believe it is a compliment. It is just showing how stupid you are and it works every time;)

here we have another kind of idiot, but an idiot up to the bone!

This is how civilized nations deal with the same issue that we have.

Modifying the habitat surrounding an airport so it will not appeal to birds is an easy way to encourage wild birds to seek alternative roosting and feeding grounds. Effective measures include:

Several methods can be used to effectively modify birds’ behavior so they will not stay near an airport. These techniques do not harm the birds but encourage them to avoid the region.

Using sonic cannons, recorded predator calls and other noise generators to disrupt birds
Using lasers at dawn and dusk to simulate predators and scare birds away
Flying trained falcons over roosting areas to disrupt birds before they nest
Training dogs to track through the habitat and teach birds that the area has many predators
As a last resort, birds may be captured and relocated by authorized wildlife control officials if they cannot be encouraged to leave the area naturally. In extreme cases, birds may be culled with the proper authorization.

Learning to work with the birds by modifying flight paths and schedules can help minimize bird strikes. While these methods may not be feasible at all airports, they can be used to help the airport work in harmony with the wildlife surrounding it.

Training spotters with binoculars and scopes to pinpoint hazardous birds areas and directing planes to different runways or approaches
Using radar equipment to track the movement and density of bird flocks to predict their behavior and manage control techniques more effectively
Adjusting flight times to avoid the busiest hours for bird activity, such as early morning and late evening or during peak migration periods

With all due respect to your offers and research, none of it applies in this case. There are no trees or ponds, or green grass to be cut, etc. The problem emanates from the filth and trash produced by those living near the airport not to mention a river close by that is used by the same people to dump their domestic and industrial waste.

the solutions listed above apply in civilized countries and societies. The problem in Lebanon is cultural specially with those people populating the areas surrounding the airport. Just look at the photos circulating in the media: it is repulsive.

prime example of competence and involvement and that is the "environment" minister talking!