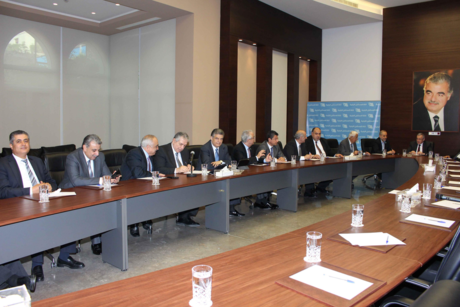 A warning voiced by President Michel Aoun on his willingness to obstruct the parliamentary elections and keep the legislative body vacant, were criticized by al-Mustaqbal ministers who described the stance as “unacceptable,” al-Akhbar daily reported on Friday.

Prominent Mustaqbal ministerial sources told the daily: “Threats launched by President of the Republic about vacuum are unacceptable.

“Aoun's rhetoric will engage the country in a constitutional debate over the jurisdictions of the President. In addition to that, the President is behaving with everyone as if he is the sole decision maker and as if the reins are in his hands alone,” they said.

The sources that spoke on condition of anonymity pointed out: “Aoun's speech that vacuum in the legislative body is better than keeping the 1960 law or extending the parliaments term have annoyed PM Saad Hariri who believes that vacuum at an state institution is unacceptable.”

During a cabinet meeting on Wednesday, Aoun said he favors vacuum over an extension of the parliament's term.

“If I'm to choose between the extension of parliament's term or vacuum, my stance is clear in this regard -- I will choose vacuum,” he was quoted as saying.

dialogue Mustaqbal, dialogue! when is your next meeting with hezbollah?

One would think these mustaqbal/hariri would have agreed with aoun on something regarding the election law prior to endorsing him for president.

that would be asking too much

he was in so much rush to become prime minister he forgot the details.

in so much of a rush*

Congratulations, Lebanon. You have your own Donald Trump, who was allowed to take office because the others hoped--as the Republicans hoped in the US--that he didn't mean all those things he said, and that getting into the office would help him mature. Harram.

The President Aoun openly declared to all Lebanese what he wanted and what he expects... after all these years, don't we know that what he wants and wishes for the Lebanon, will happen! He wants a real government, a real and corruption free, representative government! To think that anything otherwise would happen is silly or ignorant.

Those against Aoun for president need to adjust to reality!... Lebanon finally has a patriotic government that is allergic to the corruption that has been so free previously.

How is this government different than any of the previous ones? Bassil is still a permanent fixture, Berri is still Corleone the godfather, Junblatt is still the king of deals, along with Mustaqbal and their unmatched incompetence.

Stop your falsafeh and get in touch with reality.

he has to post what was scripted to him.

Jumblatt and Berri are struggling to adjust and its clear why they were against Aoun's presidency! But it is now reality and the mafia that have ruled lebanon since Syria's invasion was completed.

@flamethrower: my best friend from years past !!!!!!

How in the world are you MF ( My Friend ). I was shocked to learn that you were fired from your job at KFC. It must have been really hard for you and the family and what not. But hey look at the bright side of things, now we can see a lot more of you online.

hahahahahaha! who would think of such a brilliant and witty response to the hyenas other than our flamesrower. I hope you started to see your gift and talent that the all mighty Ayatollah has given you.

My Nepalese domestic helper and I are so lucky to be your contemporaries and to have witnessed the rise of a legend called flamesrower.