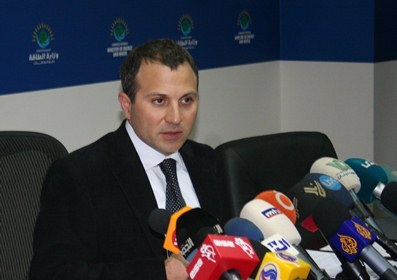 Foreign Minister Jebran Bassil replied on Friday to comments made by Marada Movement chief MP Suleiman Franjieh, over an electoral law debated among the main political parties, and said “they must find someone among them who understands numbers.”

“I realize that some cannot understand figures. Let them find someone among them who does, so he would explain the suggestions we made,” said head of the Free Patriotic Movement Bassil

On Thursday, Franjieh described as “complicated” a hybrid law that was discussed by a four-party panel comprised of the Free Patriotic Movement, al-Mustaqbal Movement, Hizbullah and AMAL parties.

“The law is as complicated as the ones who endorsed it,” said Franjieh after meeting a delegation from the Democratic Gathering bloc of MP Walid Jumblat.

Franjieh had assured that he backs laws that garner the approval of all political parties, and rejects “complicated laws tailored to the interests of specific sides.”

The main political parties are discussing several formats of the so-called hybrid law but the Progressive Socialist Party has raised the alarm over the representation of the minority Druze community, warning that any law containing proportional representation would “marginalize” Druze in the political system.

I must admit that my respect and admiration for Foreign Minister Jebran Bassil are steadily increasing and specifically for his ability to understand figures and calling upon those who don't to find someone who does.

I do respect him, I just do.