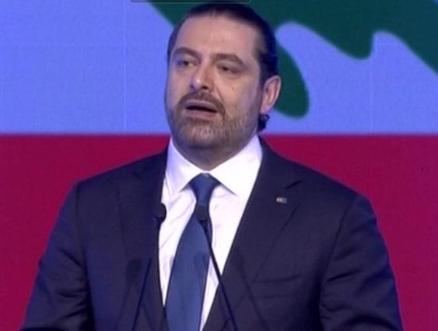 Prime Minister Saad Hariri stressed Tuesday that al-Mustaqbal Movement “will not bargain” over the issues of the Special Tribunal for Lebanon or Hizbullah's weapons, while emphasizing that the new electoral law should not “subdue or isolate” any Lebanese component.

“Justice is coming and it is 'God's promise' and your pledge to Rafik Hariri and all the martyrs of Lebanon,” said Hariri at a BIEL rally marking the 12th anniversary of the assassination of his father, ex-PM Rafik Hariri.

“Rafik Hariri will remain with us, because we are simply committed to the pledges of honor, loyalty and coexistence,” the premier added.

Rafik Hariri was assassinated in a massive and shocking suicide bombing in 2005 that destabilized the country for many years. The explosion killed Hariri and 21 others and wounded more than 200 people.

The assassination sent a tremor across the region and unleashed a popular uprising that united large segments of the Lebanese and ejected Syrian troops from the country. Five Hizbullah suspects are being tried in absentia by the Special Tribunal for Lebanon based in The Hague.

“We made initiatives when initiatives were needed to rescue Lebanon and we have the courage to confront when confrontation is needed in order to defend the State,” Hariri told the BIEL rally on Tuesday, referring to his initiatives that eventually led to ending more than two years of presidential vacuum and the formation of a new government.

“We've made concessions to preserve stability but we won't bargain over the STL, our stance on the Assad regime, illegal arms or Hizbullah's involvement in Syria,” Hariri underlined.

Apparently addressing the criticism he has faced from former justice minister Ashraf Rifi, the premier said “Rafik Hariri's name must not be used for political vengeance and it won't be a barricade for creating animosity among the Lebanese.”

“Rafik Hariri understood the profound meaning of settlements in Lebanon and we understood with him that the policy of isolation and obstinacy is a futile policy that paralyzes the State and exposes the country to sectarian conflict,” Hariri added.

“Yes, there is a dispute in the country over Hizbullah's arms and its involvement in Syria. There is no consensus on the issue in the government, the parliament or national dialogue, but what protects the country is consensus over the army and the State and only the State,” the PM stressed.

“We are now involved in governance, an integral part of a common political will to protect Lebanon and assume the responsibilities of the state. This means that we are still in the heart of the project aiming to 'cross towards the State,' in the heart of the goals that we have fought for, and for which Rafik Hariri and the martyrs of the Independence Uprising paid their lives,” Hariri emphasized.

He noted that Lebanon today is secure, legally and constitutionally, and the political efforts “should concentrate on preventing any attempt to remove it from this scope.”

Hariri added: “To those who believe that any regional side can usurp the Lebanese national decision, just as they thought in the past, I say: the failure of past experiences is a lesson to them and to everyone. The Lebanese, us in the forefront, will not allow Lebanon to be handed over to foreign axes.”

“In this sense, Lebanon will never be, not today nor tomorrow or at any time, part of any axis in the face of its Arab brothers. We do not seek rivalry with anyone, and will not allow Lebanon to be an arena for the conflicts of others on its land,” Hariri vowed.

Turning to the thorny issue of the electoral law, Hariri said Mustaqbal is “keen on reaching a new electoral law that revives political life on the condition that it does not subdue or isolate any confessional component,” topped by Mustaqbal's “allies.”

While Mustaqbal has rejected that the electoral law be fully based on the proportional representation system, arguing that Hizbullah's arms would prevent serious competition in the party's strongholds, Progressive Socialist Party chief MP Walid Jumblat has totally rejected proportional representation, even within a hybrid law, warning that it would “marginalize” his minority Druze community.

The country has not organized parliamentary elections since 2009 and the legislature has instead twice extended its own mandate. The last polls were held under an amended version of the 1960 electoral law and the next vote is scheduled for May.

The only hope for Lebanon is a popular Cedar Revolution II that maintains the same principle of freedom, democracy, independence and sovereignty but excludes all the current political class that proved to be incapable of upholding these principles. I am hopeful it will happen as no bright peopulation can stay stupid for so long.

Then we need to build a core team that believe in building a state which is truly democratic, independent and strong. We can then take the first steps to invite stakeholders into online planning committees and figure out a plan and how to execute on it.

and he elected a president who blatantly said he was part of the axis of hezbollah, assad, and iran.

please don't ask me why i respect Saado Hariri; i just do.

I am hoping hariri will win back his own parliamentary seat in the upcoming elections.

you already have on both, so spare us your BS.