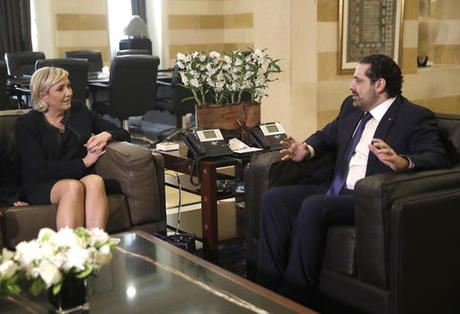 During the meeting, Hariri cautioned against associating his religion with the terrorist attacks of the jihadists who have repeatedly targeted France.

"The worst mistake would be the amalgam between Islam and Muslims on one hand and terrorism on the other hand,” Hariri said, in a statement issued by his office.

"The Lebanese and Arabs, like the majority of the world, consider France to be the homeland of human rights and of the republican state that makes no ethnic, religious or class distinction between its citizens,” he said.

On the refugee crisis, Hariri called on the international community "to assume its responsibilities", he said: "Lebanon, whose population does not exceed 4 millions, now hosts around 2 million refugees, which subjects its economy and infrastructure to an unparalleled pressure.

“The Lebanese government is currently preparing an integrated plan to face this situation and calls on the international community to assume its responsibilities in this crisis.”

On Tuesday, Le Pen is to meet Lebanon's grand mufti, the leader of its Sunni community, the Maronite patriarch and rightist party leader Samir Geagea.

Shunned by European leaders over her party's stance on immigration and anti-EU message, Le Pen's meeting with Aoun aims to boost her international credibility.

France had mandate power over both Lebanon and Syria during the first half of the 20th century.

Lol, indeed he does ya heretic. Marine Le Pen resides at the Grand Serail and Hariri came crawling to meet her.

Yeah, I guess he only crawls for Assad.

and you and your master don't?

Hezbollah owes loyalty to Syria after the 2006 war.