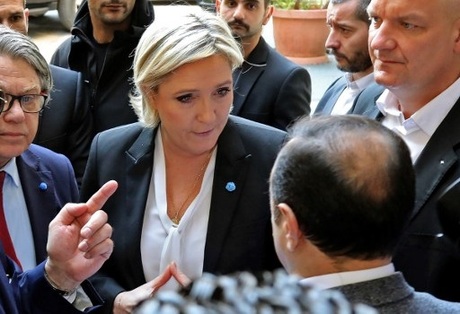 France's far-right presidential candidate Marine Le Pen has refused to go into a meeting with Lebanon's grand mufti Sheikh Abdul Latif Deryan after his aides asked her to wear a headscarf.

Le Pen was scheduled to meet with Mufti Deryan as part of her three-day visit to Lebanon this week where she met senior officials.

She was scheduled to meet Deryan on Tuesday morning.

Shortly after she arrived at his office, one of his aides tried to give her a headscarf to put on.

She refused and said: “I have met before with (Grand Imam) Sheikh al-Azhar (in Egypt) without wearing a veil."

Once she was told that customs are different in Lebanon, Le Pen walked toward her car and left.

Le Pen said she had told Deryan's office on Monday that she would not don a headscarf: "They did not cancel the meeting, so I thought they would accept that I will not wear the scarf."

In a statement on Tuesday, Dar al-Fatwa said "its press office had informed the presidential candidate, through one of her assistants, of the need to cover her head when she meets his eminence, according to the protocol assumed by Dar al-Fatwa."

"Dar al-Fatwa officials were surprised by her refusal to conform to this well-known rule," it said.

Fewer than a dozen protesters gathered near Beirut's Zaytuna Bay on Tuesday afternoon to protest against Le Pen's visit.

"From Beirut to Damascus to Paris to Washington, fascists flock together," one placard read.

At a news conference to cap her trip, Le Pen insisted she "has never confused the religion of Islam with fundamentalist Islam."

"I oppose Islam as a political project. I am fighting a war against fundamentalist Islamists," she told gathered reporters.

Islamic dress is a hot-button issue in France, where the full-face veil is banned in public places.

"A magnificent message of liberty and emancipation sent to the women of France and of the world," Philippot wrote on Twitter.

There, she saluted Lebanon's "moderate" culture, "created by Christians and Muslims."

Le Pen, the National Front leader, is leading polls of voters' intentions for the first round of France's presidential election on April 23.

She is running on an anti-immigration and anti-European Union platform; critics say that is a cover for anti-Islamic and anti-foreigner views.

The FN leader called Sunday for the international community to step up humanitarian aid to keep the refugees in Lebanon.

And Spanish Prime Minister Mariano Rajoy have said last week that "a victory of the populists would be the end of Europe," a clear reference to Le Pen's call for a referendum on France's EU membership.

Lol, what did they expect?

I don't get why mufti Derian doesn't ask Nayla Moawad to wear a Headscarf on this photo: https://s.olj.me/storage/attachments/979/24278_579474_large.jpg
Or here, Cheikh Abdel Amir KABALAN, with a woman not wearing any Hesdcarf:
https://pbs.twimg.com/media/CPf7v2LWwAASZeW.jpg:large

So the only explanation is this is just provocation towards Marine LePen, knowing she would refuse, and not wishing to meet her.

please change your name to "no.relevance". thank you.

mowaten please do not attempt to be clever or witty it's way over your pay-grade and way beyond your intellectual capabilities. But do not worry a few million more years of evolution and your kind might some day come to muster what could pass for mild whimsy.

oh and thank you, we all do.

Marine was suposed to meet Derian in his office... not in a holy place that would require wearing a Headscarf. Therefore Derian's office is not any different than Biel. He can meet women who are not wearing any Hedscarf...

Let's remind you that Marine Lepen is a european deputy elected by the people. Why would she be asked to wear a headscarf but not Michelle Obama when she goes to Saudi Arabia?

Derian (or his team) could have put an end to this non sense by telling her to come in without a headscarf instead of insisting. The only reason she wanted to meet his was because he was suposed to be an open minded man of religion.

couldnt care less about le pen or deryan, but to be honest, if she had been to the vatican she would have been asked the same and she would have done it. her reluctance to respect local customs reeks of colonial mentality

but if she was scheduled to meet nassrallah and the same happened, i bet you would not say you could care less about nassrallah, would you now?

Aaaaand my position on this would still be exactly the same, thanks for making my point stronger trollo.

Well, I don't know FT, I am actually annoyed by the two of them, the mufti for being intolerant, and Le Pen for being racist and equally intolerant. I guess I'll sit this one out.

I'm glad you chose to sit this one out, Mowaten.
With all due respect!!

When these sheiks, umans, muftis etc etc visit western leaders, do they shave,shower & wear a tie as per western custom?

This is not about customs but rather imposing this certain religion on others.

Enough of their BS...This woman has gained the highest respect from people all around the globe.

Just a bit of trivia on the Vatican dress code for women: Shorts are not allowed, skirts should end beneath the knee, shoulders should be covered, and the woman is not supposed to be dressed in white unless she is one of the seven "Catholic Queens" - the so-called "Privilège du Blanc". I'm also assuming side-boob and cleavage are a no-go, but it's not official. ;)

And whoa whoa whoa on those "no-go zones" in France ya ta2burni. I live in Montmartre in Paris now, a stone's throw from Goutte d'Or, and a couple of metro stations away from Aubervilliers, two of those so-called no-go zones as seen on FOX News and other right-wing propaganda mouthpieces. Both are easily debunkable as "no-go zones" in a few minutes. The police are a fixture in both zones, and if they ever get attacked these days it's because of protest against police brutality and nothing whatsoever to do with religion.

Chapeau bas to her .

Because she is not bowing to religious extremism, she is like Stalin, Hitler etc?

Dude you are infecting white culture with your African American slag "DA BOMB", you're gonna piss off Mme Le Pen

Dude, I can't stand Marine Le Pen either, but comparing her dughri khabit lazi2 to Stalin, Hitler and co. seriously damages the credibility of any argument one may have against her. The world does indeed have more of her likes, but their names are Trump, Aoun, Duterte, Wilders and Farage (not quite the Farage yalli kinna natrino min Allah): in other words, megalomaniac narcissists with a very narrow worldview that is fed by intolerance of others who are not like them. And sad as it may seem, but Le Pen may actually be the least psychopathic of the boys.

Texas opinion who called "norma" bonbon (probably forgetting he was signed into his real account lol), why would any sane person care if women decide to cover their hair? Are you against nuns covering their hair too?
Would you be against the virgin mary living in europe because she covered her hair and did not follow liberalism and was a conservative hebrew woman?

No these islamophobes are nothing but opportunist racists and that is why they are against Muslims. What western values are you even talking about and who made the Muslims sign a contract to adopt these so called western values and what happens when a western person does not follow these values? Is covering the body against western values? How old photos are you talking about? You think history started after european colonialism in the Muslim world 100 years ago or do you understand that that period is not representitive of the arab nature? Even some old christian women cover their hair. Only a fool would think it's fanaticism. Shame on you. I wouldn't be surprised if you're the type of filth who puts pictures of his wife in bikini on FB.

Lol "their good nature abused" haha. Their good nature that murdered and raped millions around the world? Especially in the countries whos citizens flocked to migrate to europe after their failed proxy states created by european colonialism failed them?

Europe and especially france and britain hugely owns the people of every country they colonialized so if a million of them out of hundreds of millions migrate to europe then that is nothing. For every criminal migrant in europe there are many more who help the economy and help the country thrive. The same can not be said about the europeans that came to colonialize their countries.

Colonialism never ended nor did it's consequences.

Seriously, leave it to Lebanon to make Marine Le Pen look good... Shame on us!

Headscarves are hideous. THey make women look like maids and sexond class citizens.

Only to a feminine man who likes to show off his daughters bodies for men to lust over.

By the way, virgin Mary disagrees with you.

Is everyone too blind to realize that this whole hijab drama was staged by LePen just to please French anti-Muslim voters. I wouldn't be surprised if the main purpose of her trip to Lebanon was just to get press coverage for her so-called standing up against "intolerant Islam". Shame of Deryan for falling to LePen's PR stunt.

I totally disagree with everything Le Pen stands for except for this. Bravo! Enough already with midievalism

What a joke by the so called grand mufti. This is not custom in Lebanon. this is the Saudi Bought custom that should not be and was never practice in Lebanon. Lebanon used to be an example for the area. It´s muslim being very moderate ( I don´t like to use the Word moderate but so you get my Point) but we ,as a country, have lost our identity and even our religion is being bought.
Long time ago it was a matter of disgrace to shave your Moustache according to Lebanese traditions. Today you see people with beards and shaved moustache ( where did that come from?).
Learn from Al-Azhar. Nobody should be forced to Believe what you Believe.
Even if the whole thing was staged, the mufti made people laugh at us. If his wife Went to France, would he accept that she abides to French customs and wears bikini or even takes off her hijab for a TV interview?