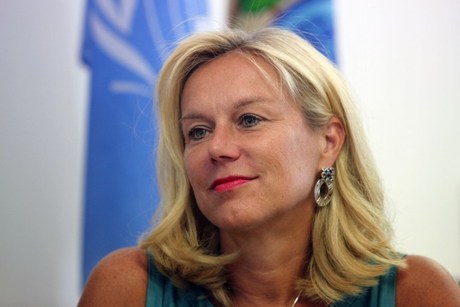 Western and European embassies have demanded clarifications about the circumstances and reasons that led to the summoning of U.N. Special for Lebanon Sigrid Kaag to the Foreign Ministry over a tweet related to U.N. Security Council Resolution 1701, a media report said on Sunday.

Quoting European diplomatic sources, An Nahar newspaper said the embassies are yet to receive an answer to their questions.

According to the Central News Agency, the U.N. has rejected the move and expressed its dismay through a stricter statement that was issued in New York by U.N. spokesman Farhan Haq, which “condemned the violation of international resolutions” and warned against such Lebanese stances.

In the wake of remarks by President Michel Aoun that defended Hizbullah's arms as necessary to deter Israel, Kaag tweeted on February 13 that UNSCR 1701 is “vital for Lebanon's stability and security.”

“Resolution calls for disarmament (of) all armed groups. No arms outside control of state,” Kaag added.

Aoun had stressed that Hizbullah's weapons “do not contradict with the State,” noting that it is “more than guaranteed” that the party will not “turn its arms inwards.”

“As long as there is Israeli-occupied land and as long as the army is not strong enough to fight Israel, we sense that there is a need for the presence of the resistance's arms so that they complete the army's weapons,” Aoun told Egypt's CBC television on the eve of a visit to Cairo.

"Western and European embassies have demanded clarifications about the circumstances and reasons that led to the summoning of U.N. Special for Lebanon Sigrid Kaag to the Foreign Ministry over a tweet related to U.N. Security Council Resolution 1701"

What clarifications you think you will get? that Bassil and Aoun's boss in Dahieh ordered them to summon Sigrid Kaag?

This is a failed state run by a terror criminal militia and anybody that believes that dialogue will resolve its illegal existence is gravely mistaken.

the UN should start by getting the mad dogs in israel on a leash, instead of telling us what to do. they whine about the resistance arms? what about the nuclear and chemical weapons in israel? when did those become legal? you may look the other way and pretend they're not there, you worthless paper pushers, but we in lebanon need a stick to scare the leeches away.

"but we in lebanon"

the heretic meant by "we in Lebanon", the iranian shias inhabiting dahieh.

whenever the interests of the Lebanese state and its citizens are biasedly come under attack, the zionist lovers jump uselessly justifying it, we unmasked them.

What a surprise? He is saying the truth that Ebola is a disease and an enemy. The other fact that the Family Protected Mazra3a is corrupted from the millions received from Ebola is a reality. This makes of them servants. Just count the number of times we wrote this in the past 5 years.

western embassies in Tel aviv must have asked the apartheid govt of the zionist state of israel about the permanent violation of the Lebanese sovereignty, rather.

btw, the summoning of Kaag was justified because simply she is biased, since the resistance is not an armed group and the weapons are there to counter the zionist violations.

Please keep educating us with your daily wonderful comments. I am getting an online degree just reading your comments.

"the resistance is not an armed group and the weapons are there..."
At least have the decency to put a comma before you contradict yourself.
How is the weather in Bandar Abbas, ya Southern inta?

Saudi Arabia and the UAE should summon the Lebanese Ambassadors in their respective countries and give them a dress down regarding nassrallah's verbal attacks on their countries.

One Troll and Two Halves Spotted

he is very original and always comes up with news ideas;)

lol @blablablabla
or
lol @frencheagle
or
lol @trolldetector
or
lol @........