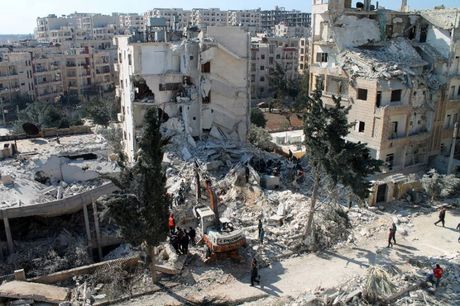 The head of al-Qaida's former Syrian branch said weekend suicide attacks in third city Homs were a message for opposition figures engaged in peace talks in Geneva to "step aside".

In a rare video address released late Monday, the head of Fateh al-Sham Front reiterated his group's responsibility for the bombings, which killed dozens of people including a top intelligence chief and close confidant of Syrian President Bashar al-Assad.

"This operation is a lesson to the defeated politicians in Geneva, and previously in Astana," said Abu Mohamed al-Jolani.

"This lesson will wipe off some of the shame that has followed those gambling with the lives of the Syrian people," he said, adding that the attacks were "just one episode in a series that will follow."

Opposition and government representatives are in Geneva this week for UN-sponsored talks aimed at ending Syria's brutal six-year war.

Fateh al-Sham has been excluded from the opposition High Negotiations Committee (HNC), as well as previous talks in Astana between rebel groups and the government.

Jolani said the deadly attacks in Homs were a message "to leave the war to our people, and to step aside."

"It has been demonstrated to them that this regime only understands the language of force and blood... These politicians... are handing the regime a victory without it having to win," he added.

The Geneva talks, the fourth under UN auspices and the first since last April, are struggling to get off the ground.

The HNC is expected to meet a Russian delegation on Tuesday, in the hope that Moscow will pressure its ally Damascus to kickstart the negotiations.

More than 310,000 people have been killed and millions more driven from their homes since the conflict broke out in March 2011.

In January, it joined forces with other hardline groups to form Tahrir al-Sham.

Its fighters have been targeted by intensifying air strikes, not just by the government but also by its ally Russia and by the US-led coalition fighting the Islamic State group.

Scores of its fighters have been killed since the start of the year.

So what's the difference between Nusra and ISIS?