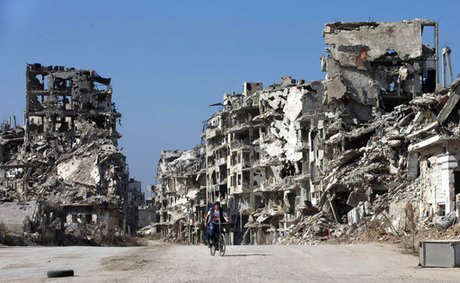 Syrian state TV says another group of rebels with their families are leaving the last opposition-held neighborhood in the central city of Homs under a Russia-brokered deal with the Damascus government.

The TV says Monday's round of evacuations from al-Waer neighborhood is the second one so far and involves 466 people — including 129 fighters.

The opposition fighters agreed to leave al-Waer after years of siege and bombardment at the hands of pro-government forces. They were guaranteed safe passage to rebel-held parts of northern Syria.

The evacuations are expected to last weeks, after which the government will be able to claim control over the entire city for the first time in years.

Some opposition activists have criticized the agreement, saying it aims to displace 12,000 al-Waer residents, including 2,500 fighters.

"“Iran and the regime don’t want any Sunnis between Damascus and Homs and the Lebanese border,” said one senior Lebanese leader. “This represents a historic shift in populations.” Darkoush said whole neighbourhoods had been cleansed of their original inhabitants in Homs, and that many residents had been denied permission to return to their homes, with officials citing lack of proof that they had indeed lived there.

“The first step in the plan has been achieved,” he said. “It involved expelling the inhabitants of these areas and burning up anything which connects them to their land and homes. The second step will be replacing the original inhabitants with newcomers from Iraq and Lebanon.”
https://www.theguardian.com/world/2017/jan/13/irans-syria-project-pushing-population-shifts-to-increase-influence

Labib al-Nahas, the chief of foreign relations for Ahrar al-Sham, who led negotiations in Istanbul, said Tehran was seeking to create areas it could control. “Iran was very ready to make a full swap between the north and south. They wanted a geographical continuation into Lebanon. Full sectarian segregation is at the heart of the Iranian project in Syria. They are looking for geographical zones that they can fully dominate and influence. This will have repercussions on the entire region.

lol @ the heretic aka flamethrower

so you 2 buffoons: any arguments that the guardian is wrong?
or are u just two bored clowns trying to be smart... LOL