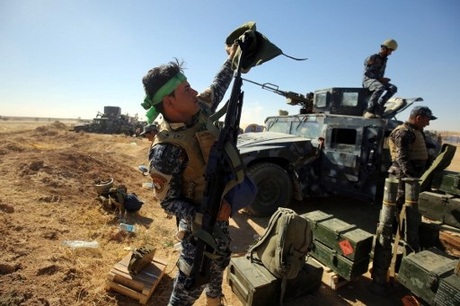 Iraqi forces renewed their assault Monday against jihadists in Mosul's Old City, after days in which the battle was overshadowed by reports of heavy civilian casualties from air strikes.

Iraqi forces began the massive operation to retake west Mosul from the Islamic State (IS) group last month and have recaptured a series of neighbourhoods, but the battle poses a major threat to civilians in the city.

Iraqi officials and witnesses have said air strikes took a devastating toll on civilians in the Mosul Al-Jadida area in recent days, but the number of victims -- said by some to number in the hundreds -- could not be independently confirmed.

"Federal Police and Rapid Response Division units began to advance today on the southwestern axis of the Old City," Lieutenant General Raed Shakir Jawdat, the commander of the federal police, said in a statement.

Jawdat said that one of their targets is Faruq Street, which runs near the Al-Nuri mosque.

IS chief Abu Bakr al-Baghdadi made his only known public appearance at the mosque after IS seized Mosul in 2014, calling on Muslims to obey him.

Iraqi interior ministry forces have been operating in the area of the Old City for several weeks, but they have faced tough resistance and progress in the area has been slow.

The Counter-Terrorism Service, which along with the Rapid Response Division is one of two special forces units spearheading west Mosul operations, has made faster progress in areas further west.

But the Old City -- a warren of narrow streets and closely-spaced buildings in which the UN said 400,000 people still reside -- poses unique challenges in terms of the difficulty of advancing as well as the danger to civilians.

However, Iraqi forces have also frequently fired mortar rounds and unguided rockets during the battle for Mosul -- weapons that pose a much greater risk to residents of areas where fighting is taking place.

The battle has already taken a heavy toll on civilians, pushing more than 200,000 to flee in addition to others who have been killed or wounded in the fighting.

An AFP photographer saw civil defence personnel and volunteers digging through the remains of houses to recover the dead in Mosul al-Jadida on Sunday.

The remains of at least 12 people -- among them women and children -- were placed in blue plastic body bags.

Rasool said that the defence ministry has opened an investigation into the reports that strikes killed civilians in west Mosul.

The US-led coalition against IS has indicated that it may have been responsible for at least some of the civilian deaths.

"An initial review of strike data... indicates that, at the request of the Iraqi security forces, the coalition struck (IS) fighters and equipment, March 17, in west Mosul at the location corresponding to allegations of civilian casualties," it said in a statement on Saturday.

But that only addresses one day, while Iraqi officials referred to strikes carried out over several days.

"We are investigating the incident to determine exactly what happened and will continue to take extraordinary measures to avoid harming civilians," he said in a statement.