2 Syrians Killed as Blast Rips through Their Pickup in Arsal 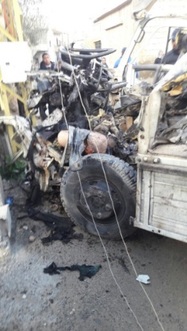 Two Syrians were killed on Thursday when a blast ripped through a pickup truck they were riding in the Bekaa border town of Arsal, media reports said.

The agency identified the dead as Hawwa al-Zuhouri, 20, and Nour al-Husseiki, 25, saying they hail from the Syrian town of Qusayr.

A Lebanese woman from the Kranbi family and two other Syrians who hail from Qusayr were also wounded in the blast, NNA added.

Voice of Lebanon radio (93.3) meanwhile said the explosion was caused by the accidental detonation of a suicide vest that Husseiki was wearing.

Lebanese officials said the blast on the outskirts of Arsal burned the small truck that the five people were using.

The five were taken to a clinic controlled by Syrian militants outside the town, officials added.

Members of al-Qaida's affiliate in Syria and the Islamic State group control areas between Arsal and the Syrian border where the explosion occurred.

The two groups often clash in the area.