U.S. Envoy to U.N.: Removing Assad 'Not Our Priority' 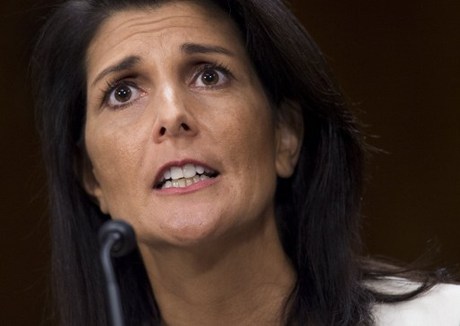 The U.S. ambassador to the United Nations said Thursday that Washington is no longer focused on ousting President Bashar Assad as it seeks ways to end Syria's civil war.

"You pick and choose your battles," Nikki Haley told reporters. "And when we're looking at this it's about changing up priorities and our priority is no longer to sit and focus on getting Assad out."

Haley was speaking after U.S. Secretary of State Rex Tillerson had signalled a change in the U.S. stance by admitting that Assad's eventual fate was up to the Syrian people.

Speaking at the U.S. mission to the United Nations, which is about to assume the rotating presidency of the U.N. Security Council, Haley said Washington will focus on the push for a political solution.

"Our priority is to really look at how do we get things done? Who do we need to work with to really make a difference for the people in Syria," she said.

"We can't necessarily focus on Assad the way the previous administration maybe did. Do we think he's a hindrance? Yes," she said.

"Are we going to sit there and focus on getting him out? No."

Haley said she would focus on ways to remove the influence of Assad's ally Iran, which has supported him in his civil war against rebel forces.

And she said Washington would work with other players in the conflict, including Turkey, to seek a long term solution.

Removing Assad was never a US priority during Obama administration which prevented qualitative weapons to arrive in sufficient quantities.

TOW missiles are advanced. You did indeed get heavy support from day one, you had unlimited money and weapons.
But you failed, good.

tell us when did the removal of assad ever was a priority for the US? israelis and US prefer him to stay in power to keep golan quiet... so spare us your "victory" slogan which is only victory in your zero IQ brain.....

How does it feel to be losing peace?
Assad will stay, you lost.

how does it feel to be allied with israel now? LOL

and i repeat when did the USA ever wanted assad out? still dodging questions when it embarasses you? poor microbe....

U.S. Envoy to U.N.: Removing Assad 'Not Our Priority'

but when was it ever your priority?

US only prioritizes destruction it seems. Iraq,Libya,Syria,Yemen? Who's next? And they do it with the blessing of the Kingdom of Horror and Gulf countries.

Start arming Assad and stop the sanctions, that will end the war fast.

now hezbollah is allied with israel and the USA as none of them want assad to leave... LOL

Lol at all the geniuses here that somehow think that abandoning regime-change plans somehow means an alliance. Are you this daft?`There are still sanctions and weapons going to various "rebels" from the US, none to Syria.