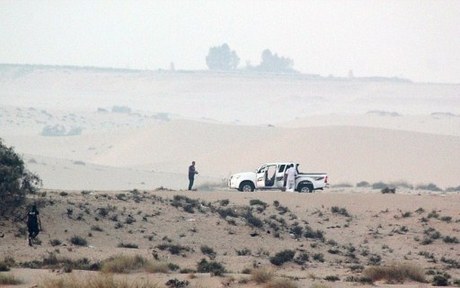 Egypt's military said Sunday a founder of a militant faction in North Sinai that pledged allegiance to the Islamic State jihadist group was killed in an air strike.

A total of 18 "extremely dangerous" insurgents were killed and others wounded in raids carried out on March 18, it said.

Among those killed was Salem Selmi el-Hamadeen, known as Abu Anas al-Ansari, a founder and top member of Ansar Beit al-Maqdis, the military said on its official Facebook page.

Ansar Beit al-Maqdis is the name used by the group before it pledged allegiance to IS in November 2014.

IS reported the death of the militant, active in the Sinai peninsula ever since the mid-2000s, in its weekly newsletter al-Nabaa last Thursday.

Ansari "joined the Ansar Beit al-Maqdis group, becoming one of its first members, and since jihad began in Sinai he was one of its building blocks," IS said.

He was previously a member of Al-Tawhid Wal-Jihad, a group that claimed a string of bombings at Red Sea resorts in the Sinai from 2004 to 2006 killing more than 100 people, it said.

IS said Ansari was jailed but had escaped during Egypt's 2011 uprising against longtime ruler Hosni Mubarak.

The jihadists have killed hundreds of soldiers and policemen since the army overthrew Islamist president Mohamed Morsi in 2013 and cracked down on his supporters, killing hundreds and jailing thousands of them.

The attacks have mostly taken place in North Sinai, though they have also been carried out in other parts of the country including Cairo.