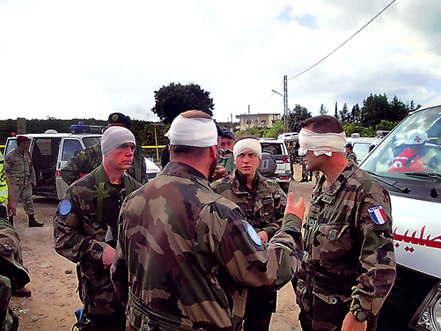 The United States on Friday condemned a roadside bomb attack in Lebanon that wounded five French peacekeepers, and urged Beirut to tackle its security problems in the south of the country.

The attack on the United Nations Interim Force in Lebanon (UNIFIL) hit a French patrol on the southern outskirts of the coastal city of Tyre, and two civilians were also wounded.

It was the third attack this year on troops deployed to the U.N. mission.

"We again strongly underscore the need for Lebanon to exercise full sovereignty over its territory," she added, alluding to the control exerted in southern Lebanon by Hizbullah.

"Lebanon must ensure its armed forces serve as Lebanon's sole defense force with a monopoly on the use of force and the possession of arms. All other armed groups should be disarmed," Nuland said.

"We call on the Lebanese government to immediately investigate and bring those responsible to account for this reprehensible attack."