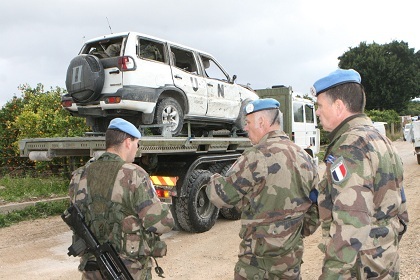 Explosives experts from the French contingent serving with the United Nations Interim Force in Lebanon on Friday inspected the scene of the blast that injured five of their peacekeepers and launched an investigation, the National News Agency reported.

NNA said that later in the day, the vehicle that was targeted in the blast in the southern city of Tyre was taken to the UNIFIL headquarters in Naqoura.

Voice of Lebanon radio station (93.3) said the French contingent launched its own investigation into the bombing in parallel to the joint UNIFIL-Lebanese army probe.

This was the third bombing this year targeting the international force, which is deployed to keep the peace along Lebanon's southern border with Israel. No group has claimed responsibility for the attacks.

Media reports estimated on Saturday that the explosives were 8-10 kilograms of TNT planted on the side of a road between the towns of Burj al-Shamali and Mahallat al-Hawsh near Tyre.

The five peacekeepers were wounded after the explosion, which was triggered by a remote control device, targeted their vehicle.

But none of them sustained major injuries. Two other civilians were injured as well.

Security sources told pan-Arab al-Hayat daily that the person who hit the button on the remote control intended to target the front of the vehicle which was carrying six French troops to avoid causing casualties.

"...to avoid causing casualties..." How sweet terrorists with a heart!?

Signals and warnings from the Hizbollah and Syrian regime after the media leaked that western secret agents are training anti-Assad army defectors in Turkey.