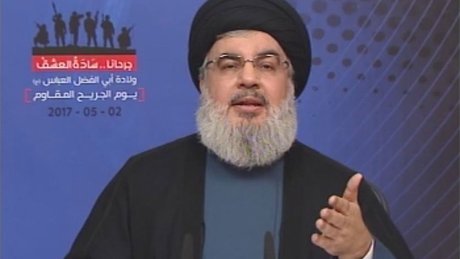 Hizbullah chief Sayyed Hassan Nasrallah stressed Tuesday that his party is not seeking to “impose” the proportional representation electoral system on the country, while warning that Lebanon is “on the brink of the abyss” regarding the issue of the electoral law.

“A lot of forces are approaching the electoral law as if it is 'an issue of life or death' and they are right in their approach,” said Nasrallah in a televised speech marking the “Wounded of the Resistance Day.”

“Some parties are unfortunately exploiting the electoral law file to sabotage some alliances and settle scores,” he lamented.

Nasrallah noted that throughout the past few months and weeks, there has been “an attempt to accuse Hizbullah that it is seeking to prevent Christians from electing their MPs with their own votes.”

“The other accusation is that Hizbullah does not want an electoral law that gives the Free Patriotic Movement and the Lebanese Forces a third of parliament and I say that these are baseless accusations,” he said.

Nasrallah noted that Hizbullah “had agreed to the Orthodox Gathering law although it would have allowed Christians to elect all their MPs.”

“It wants the fairest and most just representation and our stance is not partisan or sectarian,” he emphasized.

He pointed out that Christians and Druze in Lebanon have more concerns than Sunnis and Shiites “due to their numbers, emigration and other issues.”

at least say something new instead of copying & pasting the same statement each time the leader of the Lebanese resistance appears who defeated and deters the zionist enemy, and now the zionist ally the terrorists of Daesh, your cousins, irrelevante.

"the leader of the Lebanese resistance"

what is Lebanese about him? his iranian turban, his iranian beard, his dress code, or his pledging allegiance to wilayat al faqih in iran?

But again, there is nothing Lebanese about you either.

lol at the israeli trolls of this forum, frothing at the mouth and hysterically repeating their stupid mantras every time Nasrallah dots the i's and crosses the t's
must be hard to be you guys, so much frustration and hatred, it must eat you from the inside out :D

it's what you do every time you get stuffed, you deflect and deviate with petty comments. nothing is too pathetic when you're an iranian paid troll.

how many times have I told you eagleyawn, I'm flattered when you copy my lines but try to use them in relevant contexts or else you just make a fool out of yourself.

How come that Naharnet does not translate Sayed Hassans full speech?

Elsewhere in his remarks, the Hezbollah secretary general pointed to Saudi Arabia’s devastating aerial bombardment campaign against Yemen, stressing that the ongoing Saudi atrocities there are being ignored only because billions of dollars that the Al Saud regime is offering to the West.

“The whole world is grimly silent as millions in Yemen are being killed and living under the siege imposed by US ally – Saudi Arabia,” he said.

"The whole world is grimly silent as millions in Yemen are being killed"
so far around 10 000 killed, where are the millions? iranian liar ! LOL

"Where are Arab leaders and Muslim organizations to see the situation of Palestinian hunger strikers?"

There are no atrocities being committed in Yemen but a legitimate effort to exterminate iranian terrorists from the face of the earth. I call that a necessity and a duty.

is that all you have to say you POS to cover up for your lame trolling comments and fake accounts?

The day Lebanon is free from Saudi Israeli scum such as eagledawn and company, will be the day we celebrate a purified Lebanon.

Your Iranian's too, can't ignore both evils.

are you one of those who were on the run that time of 2006 war!? next round you may not have the chance to do it, no matter how much bunkers your apartheid state would build.

btw, the Palestinians will never get a new nationality rather than theirs Palestinian, all refugees still holding the keys of their stolen homes, either they or their sons or their grandchildren, will be back to use them, tell your neighbours just in case they are not in touch with the outside world, the palestinians will be in charge to determine your fate, with the Lebanese resistance help.

just curious, what is preventing israel from doing what you just said?

anonymous I dont know why you decided leucistic was me, but thanks for proving what I have always known about you: you are a crazy man who doesnt hesitate to fabricate baseless accusations and then act as if they were true.

for the millionth time, I only post under this name, unlike you who creates two accounts per day and others like eagleyaw/exfpm/liberty/justice who posts under dozens of alter egos every day.
also leucistic is no different than dozens of other israeli propagandists on this site, nobody need to make them up, they flock here by themselves and every day we see them cheering for israeli crimes. most of them pretend to be lebanese, others dont even bother hiding the fact they are israeli, like philippo, asaf and now this new clown.

again: you are a crazy man who doesnt hesitate to fabricate baseless accusations and then act as if they were true. no matter what the voices in your head say, I AM NOT LEUCISTIC YA HMAR

here's an idea: report leucistic to lebanese authorities and let them investigate with naharnet to trace his IP and location and arrest him.

lol. definition of "uncovered" by anonymous the crazy idiot: "the voices in my said told me so!"

"Go fume your defeat to your superior" <<< is that even english? lol you sicko

how did you conclude they were all openly cheering Israel, cheap iranian shoe! Hezbollah is an enemy of Lebanon so are you and your likes.

Towel heads do not belong to Lebanon... this person has nothing in common with me...

but he does have everything in common with mowaten

But momo does not belong to Lebanon either!

poor mowaten irani
he is oppressed and victimized; typical shia

American saudi zionist filth, always wants to see a real man talk, because they have no real leaders in their own countries.

Watch your language; you can run but you can't hide.

How come your hero Abu Trump didn't have the guts to attack the North Korea yet?

When will this iranian scumbag become a martyr so we can all make a speech? Hope soon

he is too much of a coward to martyr himself.

Nasrallah: We do not want to impose an electoral law on any sect, neither through weapons nor through street protests.

In Takiah language it means : We will impose an electoral law on every sect, either through weapons or through street protests.

that is exactly what this iranian terrorist meant

I have the utmost respect and admiration for Sayyed Hassan Nasrallah for stating that Lebanon is on the brink of the abyss.

funny that a party that:
1/ calls itself "islamic resistance" and not "lebanese" resistance,
2/ pledged allegiance to the islamic revolution of iran,
3/ that elected for life its secretary general (when elections were held before iran took over the party!)
4/ has a koran on its flag

comes and lectures others about election laws.... very democratic indeed and very hypocrit... but then again they are not lebanese....

Nasrallah noted that Hizbullah “had agreed to the Orthodox Gathering law although it would have allowed Christians to elect all their MPs.”

that was for a laugh
https://www.youtube.com/watch?v=55tQjb1mDR4&t=2s

The takia is strong today.