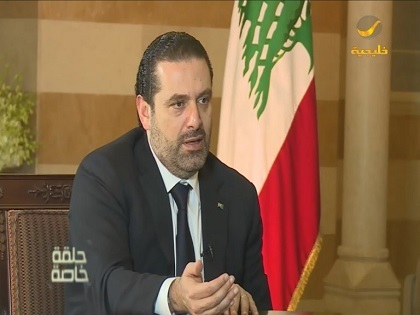 Prime Minister Saad Hariri stressed Friday that the anti-Gulf statements of Hizbullah chief Sayyed Hassan Nasrallah “do not benefit Lebanon in any way whatsoever,” as he noted that any government in Lebanon cannot be formed without Hizbullah's participation.

“Hizbullah represents large segments of our Shiite brothers and so does the AMAL Movement, and those blaming us for taking part in the same government with them must shut up,” Hariri said in an interview on the pan-Arab Rotana Khalijia TV network, pointing out that any prime minister will be obliged to form a government with Hizbullah.

And emphasizing that he rejects all of Hizbullah's “regional policies,” Hariri said he has a responsibility to push the country forward.

The Hizbullah leader has launched several verbal attacks on Saudi Arabia and other Gulf countries in recent years in connection with the conflicts in several Arab countries and the Gulf-Iranian tensions.

but apparently governments can be formed without you and you can be issued an one way ticket which says a lot about your weight on the political scene.

and texas is absolutely correct in calling your bluff by hiding behind the excuse that you cannot form a government without them.

You are only legitimizing their criminal activities for your own personal and selfish reasons.

so why share a government with an entity that does not benefit Lebanon?

because the loser benefits himself.

absolutely! Hariri and his likes are as much to blame for Lebanon's problems. By partnering with hezbollah in every government he has become an accomplice and his attempt to convince the public otherwise is as lame as when aoun said hezbollah and its weapons are beyond his control.

“Hizbullah represents large segments of our Shiite brothers and so does the AMAL Movement, and those blaming us for taking part in the same government with them must shut up,” Hariri said

So if a particular sect in Lebanon chooses to support a terrorist criminal organization then that gives them the right to be present in any government.

So, if the Neo Nazi far right group represents large segments of the Christians or ISIS represents a large segment of the Sunnis, then you have no problem with that I assume and you will be willing to be Prime Minister and sit across the table form ISIS or the Neo Nazis.

I don't think he will have a problem sitting with either as long as he is prime minister.

By sharing power with hezbollah, all this political class including Hariri are enabling hezbollah to have more power and more control over the shia community. When hezbollah is part of every government, it can and is offering services and favors to its constituents thus tightening its grip even more on said constituents.

Nouh Zoaiter is a known drug dealer and a criminal. Among his village he is a hero because he employs most of them and I am sure if he were to run for elections he would win a seat. When you do not offer people choices they will choose the path of least resistance and in this case hezbollah and Nouh zoaiter.

Thank you Mr. Hariri for setting an example of true leadership :(

We waited for over 2 years ... and we got a weak President that wants to please everyone, and has done NOTHING to fight Corruption, and a weak PM, that (like you said Tex) is mostly serving himself. Nothing is moving, nothing is happening, becaue they want to please everyone...
Our Constitution is inaplicable anymore... the system failed us, our Politicians failed us... sorry for my pessimism, but the way, Lebanon is doomed for a long period of time... this is why I left...

Hezbollah has as much legitimacy as Prime Minister Hariri have.
He is in the same government and he recognize Hezbollah as part of the government in his ministry.

Your opinion does not matter.

I always get so emotional when thousands of our resistance mujahideen get slaughtered anywhere in the world.

My heart felt condolences go to their friends and families ...... in Iran.

Unlike France, Lebanon is a country that has 2 major flaws France doesn't have...
1- A Confessional System (People will almost always privilege their confession vs competence)
2- Feudalism (Vast Majority will always vote for their Zaim, or the Zaim his family is pleading allegiance to--in exchange of services of course)

Beirut Madinati is a start... not a perfect start but a start... and still... the country is so small that being independant is uneasy... again... sorry for my pessimism...

what he is saying that no governments can be formed without corruption, stealing government resources, terrorism, car theft, burning TV stations, kidnappings, drug trade and manufacturing, assassination of political figures, threats and intimidation, massacring women and children, engaging in regional wars.

no wonder the world refers to them as heretics. Their ideology and religion are based on bloodshed, misery, oppression and revenge. Only then their mahdi will appear.

so mowaten's mahdi will not appear unless there is bloodshed? interesting culture to say the least.

I for one will never give up waiting for the blessed Mahdi. I know he is coming and soon.

With a government like this one...sorry to say but Lebanon is heading into the abyss.

Govts. Can't be Formed without Hizbullah

the same Hizbullah that assassinated his father.

have some shame just for the sake of your late father!

Lol, is Hariri even capable of doing a speech?

Lol, no but you are great at labayka ya hussein speeches.

Glad I have some fans here.