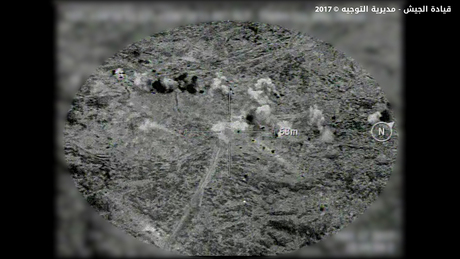 The top official of the jihadist al-Nusra Front group in the border region between Syria and Lebanon, Abu Malek al-Talli, might have been killed in a strike Wednesday in the outskirts of the Lebanese border town of Arsal, media reports said on Thursday.

“A senior military official confirmed significant casualties among al-Nusra's leaders but could not confirm whether Abu Malek al-Talli was among the victims,” the daily added.

The source however noted that there is a “large probability” that al-Talli was hit in the strike.

Some of the writings on the missiles read “For the Tears of Every Mother” and “For Martyr First Lieutenant Nadim Semaan”.

An army statement issued Wednesday evening said President Michel Aoun visited the Army Command's headquarters in Yarze to “discuss the situations, missions and needs of the military institution” and to “watch a live broadcast of the special operation that was carried out by Air Force helicopters against targets for the terrorist groups in the outskirts of the Arsal and Ras Baalbek areas.”

I wonder who provided the technology to the LAF to live broadcast this attack: Iran or the USA?

Why would the army bomb an ally in the fight against Wahhabism?