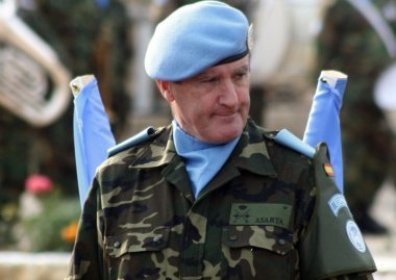 The commander of U.N. troops stationed in southern Lebanon on Monday condemned an overnight attack in which a rocket apparently fired towards Israel landed in Lebanese territory, injuring a woman.

"This is the third incident involving serious security breaches south of the Litani river in a period of two weeks," UNIFIL Force Commander Major-General Alberto Asarta Cuevas said in a statement.

"These instances show that despite all our efforts there continue to be weapons and hostile armed elements ready to use them within our area of operations."

U.N. Security Council “Resolution 1701 clearly stipulates that it is the responsibility of the Lebanese government to implement this decision whereas UNIFIL is mandated to assist the Lebanese Armed Forces (LAF) in this regard,” Asarta noted.

“We have excellent cooperation with the LAF who are our strategic partners on the ground. We remain committed to extend all necessary support to LAF and we will do everything possible within our capabilities and scope of our mandate to assist LAF in this endeavor,” he added.

Asarta said that he discussed “further steps” with Army Commander General Jean Qahwaji during a meeting in the southern town of Naqoura earlier in the day.

“He shares my concerns. We are taking concrete measures together with the LAF to further reinforce security across our area of operations while efforts continue to identify and apprehend the perpetrators of these attacks,” the UNIFIL commander added.

The Katyusha rocket fired late Sunday from the Lebanese border region of Qaissiyeh landed in the village of Hula, near the border with Israel, security officials said.

The incident took place amid a number of security incidents in recent weeks that have heightened tension and prompted fears that the nine-month uprising in neighboring Syria could spill over and destabilize Lebanon.

Last week, a roadside bomb wounded five French U.N. peacekeepers in the southern coastal town of Tyre, the third such attack this year against troops from the U.N. Interim Force in Lebanon (UNIFIL).

And on November 29, a series of rockets were fired from the border area into Israel, prompting a retaliatory strike by the Jewish state.

No one has claimed responsibility for both incidents.

France and the Lebanese opposition have blamed the embattled regime in Damascus for last week's attack on the French peacekeepers, saying it was carried out with the help of Hizbullah, which is allied with Syria and has a key role in the Lebanese government.

Asarta said there was a clear need to enhance security measures in southern Lebanon and that UNIFIL was working in close cooperation with the Lebanese army to prevent an escalation.

"Recent efforts by certain elements have been directed at destabilizing the area and we simply cannot allow such acts of violence that endanger the safety of the local population and the security of southern Lebanon," he said.

The border region has been largely quiet since Hizbullah and Israel fought a devastating war in 2006 that left much of southern Lebanon in ruins.

If "destabilize" means anything, it describes what happens when you have foreign troops on your territory. In that measure, Israel is nothing but destabilization.