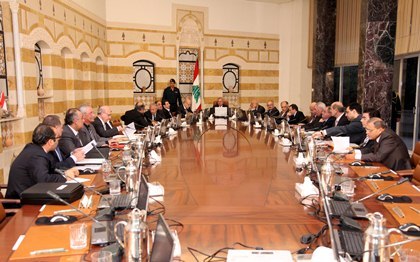 The cabinet has approved a draft law that would allow Lebanese expatriates to apply for the citizenship of their country of origin, a move that would help them in the future to take part in parliamentary elections.

Interior Minister Marwan Charbel told An Nahar daily on Tuesday that the draft law was approved with minor amendments. He said only the children of fathers and grandfathers of Lebanese origin would get the citizenship and not the children of Lebanese mothers who are married to foreigners.

Lebanese law prevents giving the citizenship to the children of a Lebanese mother if the father was a foreigner.

The head of the Maronite Institution for Expatriates, former Minister Michel Edde, told An Nahar that it is the right of Lebanese expatriates to regain the citizenship of their country of origin.

The laws of the countries that they immigrated to, particularly the Americas, Africa and some European states, used to prevent them from getting the Lebanese citizenship, he said.

Ever since slain ex-Premier Rafik Hariri approved such a move, the Institution has been collaborating with Bkirki to give the nationality to the expatriates not only Maronites and Christians but all Lebanese who deserve it, Edde said.

The former minister hailed the cabinet’s approval of the draft law and thanked President Michel Suleiman and Premier Najib Miqati, hoping that the parliament would ratify the draft law.

The draft law will now be discussed in parliament and must be ratified by MPs to be passed into law.

The cabinet’s green light to give the citizenship to Lebanese expatriates would pave way for their participation in the parliamentary elections if a new law adopted by the government Okays the voting at Lebanese embassies abroad.

yes great, so we give nationality to expatriates but women cannot transfer their citizenship to their kids even if they live in Lebanon.

After hours of deliberation and heated discussions, Cabinet decides that the heater temperature in Baabda is too high and it should be brought down from 26 to 24.5

Cabinet decides that Tiramisu is better than chocolate cake for minister's birthdays.

This is ridiculous I don't understand why as mothers we can't give the nationality to our children! This is pure DISCRIMINATION

Now make sure all expatriates can vote in the next election.

this is outraging to see that lebanese who never lived in lebanon can get the nationality while lebanese from foreign father living for years in lebanon will never be lebanese...

these "responsible" is appalling by their stupidity....

This is pure discrimination and unjustice. Women has the same right as men to give the Lebanese Nationality to their Family. I hope that the above law will never be approved in the parliament unless will include the women right to Nationality.