Hariri Walks Out of Parliament after Verbal Clash with Gemayel 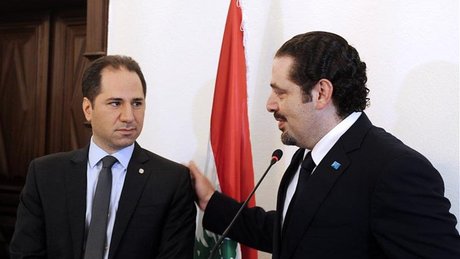 The heated debate erupted after Gemayel accused the government of approving an 11-month extension of parliament's term in order to have enough time to “offer electoral bribes.”

At that point Hariri interrupted Gemayel, insisting that “this is not what the government is doing.”

“Do not interrupt me, let me finish my remarks,” Gemayel responded.

The exchange prompted Hariri to leave the parliament hall but he eventually returned after Gemayel finished his statement.

Speaker Nabih Berri later asked that Gemayel's remarks be omitted from the session's minutes of meeting, prompting the young lawmaker to say, “You can delete this phrase but no one can prevent us from saying what we want to say.”

The electoral law was later approved by parliament amid the objections of the Kataeb Party, MP Butros Harb, MP Assem Qansou and other lawmakers.

Mr PM, you and Hakim have bowed to Ebola. Once again. Once more. Once too much.

Gemayel is 100% correct. The ruling class devised an election law that ensures their return to power and gave themselves almost a year to bribe and do favors for those who still believe in them. Corruption at its best !

So Gamayels are now saints that never did any corrupt deeds?
The joke of the year.

I have the utmost respect and admiration for Prime Minister Saado Hariri for walking out Friday of a parliamentary session dedicated to discussing and passing the new electoral law after a verbal clash with Kataeb Party chief MP Sami Gemayel.

I also respect him for eventually returning after Gemayel finished his statement.

Thanks for keeping your head straight Sami. It seems you are the only one to do so...