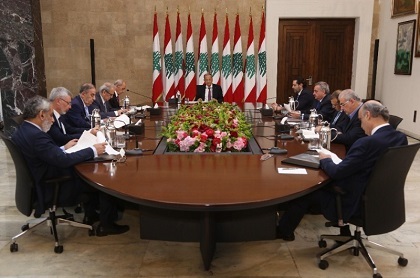 Political parties represented in the government convened in a consultative meeting on Thursday at the Presidential Palace in Baabda at the invitation of President Michel Aoun.

A closing statement said the conferees agreed on "continuing the implementation of the Document of National Accord (Taef Accord), especially in terms of harmonizing between preserving our democratic, pluralistic system and devising a clear vision with a specific timeframe for a full transition to a complete civil state.”

The conferees said such a plan should start with “consolidating equality and equal (Christian-Muslim) power-sharing before moving to the formation of the national commission for the abolition of sectarianism.”

The leaders also agreed on “preserving the country's structural foundations especially in terms of demography and geography, and holding onto Lebanon's social fabric.”

“We will confront any attempt to naturalize any non-Lebanese group on Lebanon's soil and we will work on preventing any internal migration whether from the rural areas or through the transfer of personal status records across regions,” the statement added.

The conferees also stressed the need to “approve administrative decentralization as soon as possible and preserving the civil state.”

“The government is required to follow up on this plan through a ministerial committee aimed at providing the necessary infrastructure for the rise of the national economy, such as providing 24/24 power supply, protecting Lebanon's water resources, creating dams, cleaning river streams, and utilizing oil resources through finalizing the legal framework for land and offshore drilling,” the statement added.

The conferees also called for “expediting the process of providing high-speed internet for the cheapest possible prices, devising a public transportation plan, and securing the necessary funds for wrapping up the file of those who were displaced during civil war.”

As for reform, the country's political leaders underscored the importance of “endorsing transparency in the work of state institutions, reactivating public administration through restructuring it with competent and specialized appointments, helping the judiciary immunize its independence, activating the work of inspection authorities to fight corruption, and modernizing and implementing laws especially those pertaining to the judiciary, investment and commerce.”

“These points represent a host of national goals on which all Lebanese agree and their success would be a success for the whole country, that's why they must be pursued and implemented through a unified national will,” the conferees concluded.

Franjieh's visit to Baabda was the first since Aoun's election as president in November 2016. He had boycotted the binding parliamentary consultations to name a new premier as well as the latest presidential iftar banquet.

The meeting comes a few days after the agreement on an electoral law that will govern the parliamentary elections scheduled for May 2018.

The meeting was widely criticized by opposition parties mainly Kataeb leader Sami Gemayel. He said the “opposition should have been invited to the meeting as well.”