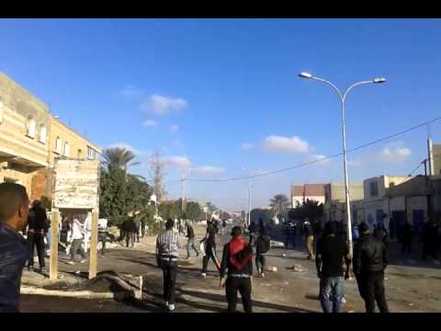 Relatives of Tunisians who drowned after a migrant boat collided with a navy vessel at the weekend have set fire to a local government building in protest, officials and an NGO said.

Interior ministry spokesman Yasser Mesbah said around 40 Tunisians torched the building in the central town of Souk Lahad and tried to set a police station on fire.

Police fired tear gas to disperse the protesters, he said.

At least eight migrants drowned on Sunday after their boat sank following a collision with a Tunisian navy vessel in the Mediterranean, while 38 others were rescued, the defense ministry has said.

In a television interview Thursday evening, Prime Minister Youssef Chahed called the sinking of the migrant boat "a national catastrophe."

Romdhane Ben Amor, of the Tunisian Forum for Economic and Social Rights NGO, said the protesters were relatives and friends of three migrants who died and of some of the missing.

According to Ben Amor, the demonstrators set fire to the building to protest against "the attitude of the government" which they say is not being forthcoming with information about their loved ones.

"There is a lot of tension and anger," Ben Amor said.

Expressing condolences to the relatives of the migrants who perished, Chahed said the government would "follow the inquiry and speed up the determination of responsibilities" for the tragedy.