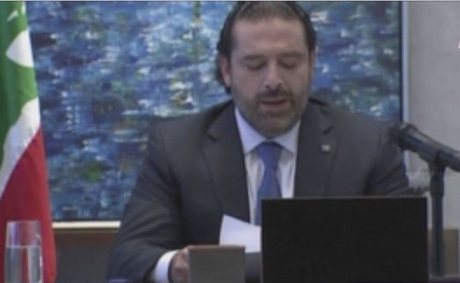 Lebanese political figures reacted on Saturday to a surprise resignation of Prime Minister Saad Hariri which he announced from Saudi Arabia citing Iranian “influence” in Lebanon and expressing fears of being assassinated.

According to a statement by the presidential press office, President Michel Aoun is waiting for Hariri's return to Beirut to inform him of the circumstances of the resignation.

Hariri had contacted Aoun and informed him of his decision.

Speaker Nabih Berri has cut short his visit to Egypt to return to Beirut following the Premier's resignation.

Progressive Socialist Party MP Walid Jumblat took to Twitter and said: “Whatever the difficulties are, sacrifice for the sake of consensus, dialogue and stability is fundamental and our existence is predestined.”

“Lebanon is too small and weak to endure the economic and political repercussions of the resignation,” lamented Jumblat.

Lebanese Forces MP Antoine Zahra said: “We have heard from Saudi authorities about intentions of some to create trouble in Lebanon.”

He expressed hopes the resignation would pave way for solving other political obstacles.

Justice Minister Salim Jreisati described the move as “confusing and suspicious in terms of time, place and content.”

For his part Mustaqbal bloc MP Moustafa Allouch explained that “Hariri's resignation came after he failed in knocking some sense into Hizbullah.”

“Hariri's resignation is very surprising and I fear that Lebanon has entered the regional conflict,” said MP Ghassan Mokhaiber.

Hariri announced his resignation Saturday, citing Iran's "grip" on the country and threats to his life.

"I announce my resignation from the post of prime minister," he said in a speech broadcast from Saudi Arabia by the Al-Arabiya news network.

"I felt what was being covertly plotted to target my life," Hariri said.

It is rather Saudi Arabia threatening Hariri, that he is either with them against Iran, or he will be forsaken by the kingdom forever.

They will, it will just go on without him until we find a new Prime Minister.

and speaking of puppets listen to this cute cuddly one..

Why do you pretend to care for Christians Movaten?

Yet you ignore Iran completely, fake "Cristhian" they are just as awful. You don't care at all about Christians, you manipulate and even hijack our names.

Take it to KSA fake Movaten account #89. Big internet warrior you are lol.

Nice try redirecting fake Movaten account #90, you're both the problem.

Shias are the absolute majority and we have the guns, how do you plan to get 80% of parliament and 90% of the Cabinet?

Funny how you admit you're Iranian fake account #91. Point is you aren't Lebanese.

Nice come back fake account #92, you must feel special.

You didn't answer my question, why do you pretend to care for Christians?

Yet, besides ignoring the question, you neglect to bring out Iran, which is also part of the problem. You can't get at one without acknowledging the other, YET you blissfully avoid Iran who are equal contributors to the chaos that has befallen Christians. You attempted to redirect, which tells me you're not the "Cristhian" you claim to be, but another fake account who runs around.

So now the iranians hezbos are ruling out the possibility that Israel may want to assassinate Hariri like they did his father? loooool