'We All Want to Pray in Jerusalem', Says Bassil Urging Arab Measures, Uprising 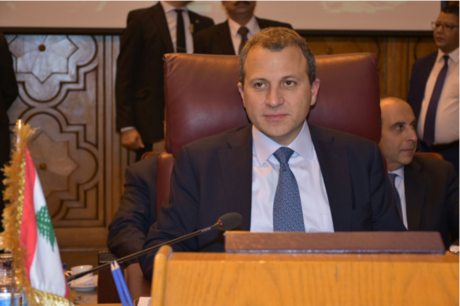 “Jerusalem cannot belong to a unilateral state… Jerusalem is for Jews, Christians and Muslims. We are the sons of Abraham, Jesus and Mohammed, we all want to pray in Jerusalem and we will not accept to be prevented,” said Bassil at an emergency Arab League meeting in Cairo over Trump’s move.

He warned that the Arab countries are today facing two choices: “Revolution or the death of a dormant nation.”

The minister then suggested a host of measures to confront the U.S. administration’s move.

“We must restore the unified Arab policy to take deterring measures in response to the U.S. decision and any similar decision by any other state, starting with diplomatic measures to political, economic and financial measures,” Bassil said.

“There should be a unified popular uprising in all our Arab countries… This uprising should not stop before the implementation of all the stipulations of the Arab Peace Initiative without any selectivity,” the FM added.

He also urged Arabs to achieve “an inter-Arab reconciliation,” describing it as “the only path for the salvation of this Nation.”

“We must call for an emergency Arab summit for Jerusalem to restore its Arab identity, because without Jerusalem there can be no Arabs and no Arabism,” Bassil added.

The U.S. decision has ignited protests across the Middle East, where it is widely seen as a blatantly pro-Israel move that threatens the decades-old peace process.

Lebanon is home to 450,000 Palestinian refugees, nearly 10 percent of the population.

Why not impose sanctions against the US, kind of joint action plan with Teheran ? ;)

"and any similar decision by any other state," BUT IRAN of course.

This creature is pathetic and speaks words much bigger than his size.

Bassil is more racist and sectarian than the worst zionist you would ever meet.

and who the hell are you to judge what and who people are, POS!

'We All Want to Pray in Jerusalem', Says Bassil

How touching when the filth show emotions.

It's what he's ordered to say by his superiors in Tehran, nothing more.

Sellouts to Iran are not Christians, nor worthy of being, bighassan always playing the victim lol. PS Not a zionist either, you're both scumbags.

Didn't you claim to be Sunni and Arab? Where is your support for Palestine hasbara vermin.

"Jerusalem is for Jews, Christians and Muslims."
He needs to submit a resolution to UNESCO declaring this.

Bassil is spot on. Well said.

A sellout is talking, his words carry no weight - Just like Mystic.

i dont know if son of mohammad and jesus is going to sit well with the jews and muslims (or christians.) bassil has no grasp on what he is talking abuot and i am sure people have been beheaded for blasphemy for far less.

I thought Mohammed had no sons!!!!

Now you conveniently use the Christians to your benefit, what hypocrisy.

Which Christian family name did you steal?

They're your lovers and exploiters of Christians, just like you.