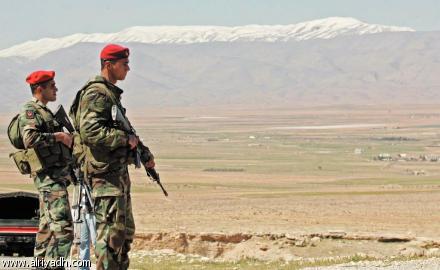 The mayors and the municipal council of the town of Arsal slammed on Wednesday the statement of Defense Minister Fayez Ghosn, who warned that al-Qaida members have entered the country through the town.

This information “should motivate (the authorities) to deploy the Lebanese army along the border with Syria to halt the continuous Syrian violations of Lebanese sovereignty,” they said in a statement.

“We reject his allegations,” they added.

The mayors urged Prime Minister Najib Miqati to resolve the issue, demanding “those who are keen to preserve the civil peace not to fall a victim of those allegations.”

Ghosn said on Tuesday that al-Qaida members have entered the country through the Bekaa border town of Arsal “under the guise of being members of the Syrian opposition.”

He noted that reining in such incidents was “first and foremost the responsibility of the army and security forces,” but added that “at the same time it is a national responsibility that must be shouldered by all Lebanese parties.”

he beleives what his master said not what the lebaneses said

Ghosn should be ashamed of himself. What a Syrian bootlikcer.

We didn't hear anything useful from our defence minister since he was appointed minister, then he comes and tells us a Lebanese town of Arsal is a pathway for Qaida members!! Someone should tell Ghosn to go play somewhere else. This is a fabricated story, directed from Syria and orchestrated by Hizbullah in Lebanon....

Do you still believe this is a fabricated story

Frangieh told our appointed minister what to say based on a telephone call from Assad to Frangieh. You see the dog does not bite his brother.