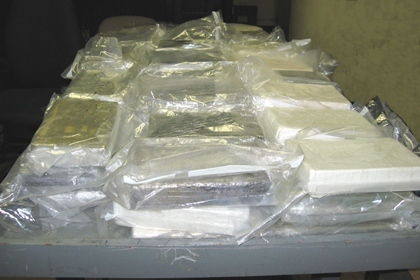 Serbian police said Wednesday they have arrested three Australians and a Lebanese national in an operation to dismantle an international cocaine trafficking ring.

The arrests at a Belgrade hotel followed a nine-month investigation led jointly with Australian authorities, an interior ministry statement said.

The three Australians, identified by their initials and year of birth only, were involved in smuggling of 1,280 kilograms (2,820 pounds) of cocaine seized in Sydney.

Investigators launched a probe in April 2017, after the drugs were seized in the port of Sydney in a container arriving from China, the ministry said.

The Australians are suspected of being part of an "organized criminal group" and the Lebanese of "forging documents," it said.

The suspects arrived in Belgrade to hand over the money, the ministry said without elaborating on the intended beneficiary.

During the operation police seized 638,020 euros ($778,000) as well as cash in other currencies including Australian dollars, Japanese yens and the Czech crowns, along with a pistol.

Serbia lies on the so-called Balkan route used by traffickers to smuggle drugs, weapons and people towards western Europe.

In neighboring Montenegro, an Australian-Montenegrin man, described by local media as a Balkan drug kingpin, has been held in prison since mid-2017.

Vaso Ulic is suspected of organizing the trafficking of 60 kilograms of MDMA -- commonly known as ecstasy -- to Australia from several countries between July 2007 and May 2008.