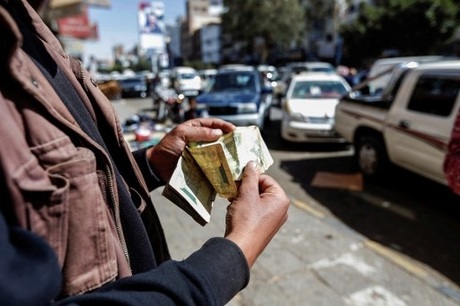 A sharp rise in the currency of war-torn Yemen Thursday following a $2 billion Saudi bailout sparked hope of relief for millions at risk of famine and reliant on imported food.

The Yemen conflict has claimed more than 9,200 lives since Saudi Arabia and its allies intervened to help the government fight rebels in 2015, pushing its frail economy to the brink of total collapse.

For more than a year, the government has been unable to pay salaries and the riyal has more than halved in value against the dollar, leaving Yemenis unable to afford food staples and bottled water.

But after Saudi Arabia announced a massive cash injection in the central bank, the Yemeni currency rose 16 percent against the dollar on Thursday.

Riyadh's decision Wednesday to transfer $2 billion to the central bank to boost the riyal followed a desperate plea for help by Yemen's president and prime minister.

"As the value of the riyal goes up, the living conditions of Yemeni citizens will change for the better," the Saudi information ministry said.

After Saudi Arabia and its allies entered the fight against the Iran-backed Huthi rebels in March of that year, the riyal began to plummet, dropping to 500 against the dollar by 2018.

Money changers across the country -- including in the rebel-held capital Sanaa and the government bastion of Aden -- reported the dollar trading at between 420 and 450 riyals on Thursday.

The Saudi-backed government has now capped the exchange rate against the dollar at 390 riyals, but money changers across the country appeared to have turned a blind eye.

More than one million civil servants lost their jobs in 2016, when President Abedrabbo Mansour Hadi transferred the central bank from Sanaa to his hometown of Aden.

The rebels still operate their own central bank from the capital.

Saudi Arabia, which itself faces a hefty budget deficit, said Thursday it had sent its ambassador to Aden, three years after he fled Yemen as the Huthis overran the capital.

The Yemen conflict has left more than three-quarters of the population in need of humanitarian aid and 8.4 million at risk of famine, according to the United Nations.