Who Are the Pro-Turkey Rebels Advancing on Syria's Afrin 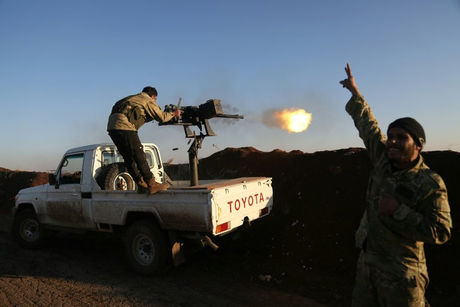 Turkish forces and their Syrian rebel allies have launched a cross-border offensive against the Afrin region of northern Syria, held by a powerful Kurdish militia.

An alliance of pro-Ankara rebels is amassing on front lines around Afrin for an expected ground attack. AFP takes a deeper look at those factions and their objectives.

- The fronts -Afrin is a hilly enclave that juts out from Syria's northern Aleppo province. Turkey holds the borders to the north and west while Syrian rebels control those south and east.

Rebels have deployed along a highway east of Afrin between their two strongholds of Azaz and Marea.

Other forces, including some fighters from the neighbouring province of Idlib, have gathered south of Afrin.

Rebels have also launched a push alongside Turkish soldiers from inside Turkish territory, south into the enclave.

Ankara had bussed around 600 rebels from northern Syria into Turkish territory ahead of a ground invasion.

- The forces -The Turkish-backed rebel forces taking part in the offensive number around 25,000, according to Yasser Abdelrahim, a key member of the campaign's joint operations room.

They include factions from Euphrates Shield, an operation launched by Ankara in 2016 against the Islamic State group and the People's Protection Units (YPG) militia which Turkey considers as "terrorists".

Euphrates Shield brought together a smattering of non-jihadist factions that have received Turkish and US support, among them the Sultan Murad Brigades, Hamzat Division, and Mutasem Brigades.

Those forces are fighting side-by-side again in the Afrin assault.

Many of these groups have threatened the YPG or already clashed with them.

- The mission -Rebel forces behind the offensive say they are opposed to the YPG and its political branch, the Kurdish Democratic Union Party (PYD), calling the groups "terrorists" and "separatists".

"The operation is to liberate the area from all kinds of terrorism and protect civilians, Arabs and Kurds," said Abdelrahim, who is also Faylaq al-Sham's military chief.

"We're not attacking to reach the town of Afrin. The residential buildings are not our aim -- just the military bases and military positions used by the PYD and YPG."

But rebels also blamed the YPG for not battling regime forces and have even evoked ethnic divides and accuse them of displacing Arabs.

"The goal of the offensive is, in the first phase, to oust the separatist parties from the Arab villages in our areas," said Abu Meslem, a field commander in Al-Jabha al-Shamiya.

He insisted "Operation Olive Branch" does not aim to push out the entire Syrian Kurdish community.

"This is our duty: to oust the separatist parties and bring back the displaced families who have been living in tents during the winter," he told AFP.

- The operation -On Sunday, a day into the operation, rebel forces and their Turkish backers entered the Afrin region and claimed to have captured several villages and hilltop positions.

The state-run Anadolu news agency said Turkish troops, whose number was not specified, were advancing alongside pro-Ankara rebels and were already five kilometres (three miles) inside Syria.

Turkey has mainly provided air cover to the operation, pounding dozens of YPG targets with artillery and air strikes.

Traitors and mercenaries, that's who.

They will be weakened by the Kurds, and then Assad will finish them off.